By Ganesh V
A. Kanyakumari’s violin recital at Srinivasa Sastri Hall near Luz Corner on 13 December was brilliant. Right from the first note, Kanyakumari effortlessly demonstrated her mastery over the instrument. I was surprised to find her playing an electric violin. But then, I was attending a live concert of hers after nearly two decades! The last time I had seen her on stage, she was accompanying Mandolin Shrinivas, who was a rising star in those days. 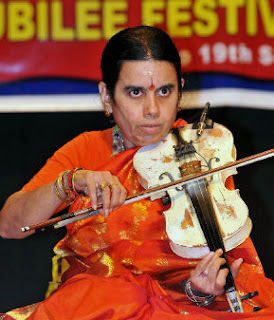 Kanyakumari is an underrated violinist, probably because of her self-effacing nature (T. Rukmini is another such, from that generation). She has been enchanting listeners with her music for more than four decades; yet, she hasn’t become a ‘star’ performer unlike some of her contemporaries. She comes across as a soft-spoken person who is content to let her violin speak for most of the time. Often though, there is a twinkle in her eyes and a gentle smile on her lips, as she performs on stage.
Over the years, I have listened to her music on tapes and CDs. I have heard her accompanying D.K. Pattammal, MLV, MS and a host of other stalwarts. Her jugalbandis with sitarist Janardhan Mitta are especially close to my heart. She has definitely matured as a performer. Much like wine, she keeps getting better with age.
Yesterday’s concert began with a varnam and then moved on to kritis in Khamas, Sahana, Charukesi, Kapi and Sindhubhairavi. These were the ragas I could identify. Being untrained in Carnatic music, I could not identify the other ragas she played. Given the time constraint (it was a two-hour concert slot), Kanyakumari had to per force keep the alapanas and swaras short and crisp. I got the feeling she would have preferred to have more time on her hands, so as to play more leisurely.
A short detour. One wonders why the organisers gave her just two hours to play. Since the concert began at 6.30 p.m., it could easily have gone on till 9.30 p.m., which is not an ungodly hour even for good old Madras. It seems so wrong to ask a musician of her calibre to play on a tight leash. Musicians like her should be given the freedom of playing for three hours or more. I’m sure at least some of the listeners will stay back to savour every note until the finish.
Ok, let me get back to the concert. Kanyakumari did full justice to every raga she played. She kept the tempo brisk throughout the recital. At the same time, she did not sprint towards the finish either. Her treatment of Charukesi (the main raga of the evening) was especially moving.
A word on the other musicians on stage. Kanyakumari’s disciple M. Rajeev supported her well. Whenever he was given a chance to play solo, he did so very well. Patri Satish Kumar on the mridangam played with energy and flair. One could sense the enormous talent lurking in him. However, at times, one felt that his energy got the better of him. E.M. Subramaniam on the ghatam provided adequate support, though he seemed uninterested at times (or maybe that was just my impression).
As the evening passed, the sense of enchantment kept growing steadily on me. And when the curtains finally came down (at 8.45 p.m., Kanyakumari having quietly stolen an extra quarter hour!), it was with a sense of deep contentment that I walked out.
Posted by Sruti Magazine at Wednesday, December 14, 2011