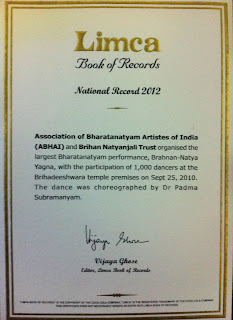 On September 25, 2010, 1000 and more dancers performed Bharatanatyam at the Brihadeeswara Temple in Thanjavur as an offering on the occasion of the 1000th Anniversary of the temple’s consecration. Dr. Padma Subrahmanyam (President, ABHAI) choreographed three items and led from the front. The event was organised by the Association of Bharatanatyam Artistes of India (ABHAI), Chennai and Brhan Natyanjali Foundation, Thanjavur. Through the efforts initiated by K.S. Sudhakar of Swathi Soft Solutions, who documented and helped web stream the event live, the unique Brihan Natya Yagna called Rajarajeswaram 1000 has entered the Limca Book of Records as “National Record 2012”. ABHAI and Padma Subrahmanyam have received citations.
Posted by Sruti Magazine at Saturday, February 25, 2012