By L.S. Rajagopalan
Madhava Chakyar was born on 15th February. 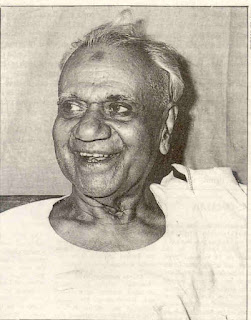 A member of the clan of the Puthiyedath Chakyar, Madhava Chakyar was born in a village near Quilandy in old Malabar on 15 February 1899. Dancing and acting were in the blood of the family, and Madhava Chakyar had his early training with his mother, whom he lost at the age of nine, Kuniyil Narayanan Nambisan, and afterwards with his uncles, Mani Neelakanta Chakyar, Parameswara Chakyar and Narayana Chakyar. Along with his dance studies, he also learnt Sanskrit from Pannisseri Sankaran Nambudripad and tarka sastra and vedanta from H. H. Rama Varma Parikshit Tampuran of Cochin.
Madhava Chakyar had his arangetram at the age of 11 in Tiruvangayoor Siva temple. From then on he began giving regular performances in various temples. His family had hereditary rights to perform in 40 temples in north and central Kerala. Some of them allowed only Chakyar Koothu to be performed under their auspices, while others encouraged the entire gamut of Koodiyattam, including the ritualistic performance of Anguliankam, and Mathavilasam. Madhava Chakyar won high renown for the artistry of his performance in these temples, as well as in many others. His forte was netraabhinaya, the expressive use of eyes to demonstrate a wide range of emotions. Over the years, Chakyar gave performances outside Kerala too -- in Madras, Bombay, Delhi, Benares, Ujjain and Bhopal, and also before the senior Sankaracharya of Kanchi.
Chakyar taught at Kerala Kalamandalam where he trained advanced students in Kathakali and Koodiyattam. He taught Kathakali also at the P. S.V. Natya Sangham in Kottakkal, and the Gandhi Sevasadanam in Perur. For some time he also taught Sanskrit at the Sanskrit school in Lakkiti where he had his home.
Many of his students, including some of his sons and nephews, went on to become proficient performers in their own right in Kathakali and Koodiyattam. Among them are: Kalamandalam Krishnan Nair, Kalamandalam Ramankutty Nair, Anand Sivaram and Madhava (Kathakali); sons P.K. Narayanan Nambiar and P.K.G. Nambiar (Padhakam and Koothu); nephews Neelakantan Chakyar and Damodara Chakyar; Ammannur Kochukuttan Chakyar, Kalamandalam Raman Chakyar, Kalamandalam Sivan Namboodri, Kalamandalam Girija and Kalamandalam Shailaja (Koodiyattam).
He had foreign students too: Christopher Birski from Poland and Farley Richmond from America.
In 1975 Madhava Chakyar published Natyakalpadrumam, a comprehensive treatise in Malayalam on Koodiyattam. Hailed as the most authoritative book on the subject, it deals with all aspects of Koodiyattam and is as important for the scholar as for the interested layman. Other works of his include Mathavilasam, a branch of Koodiyattam, and stage manual for the third act of Naganandam and the second and third acts of Sakuntalam.
Chakyar made several broadcasts over All India Radio on Koodiyattam and also appeared on television in interview programmes.
Many honours came to him from his early days, and before Independence these were principally gifts of special gold ornaments from kings and temples. Principal among these was the veera srinkhala (gold wristchain) which he received from the Siva temple in Taliparamba when he was only 24. Taliparamba has, from ancient times, been the centre for Koodiyattam. Rejection of a play by the authorities in Taliparamba invariably doomed it. Story has it that when King Kulasekhara Varman of Tiruvanchikulam presented two plays he had written at the Taliparamba temple, the assembly rejected them. Undaunted, he had them presented in his own realm, with additions, criticising the Namboodris of Taliparamba for having taken to eating, cheating, sex and sycophancy instead of following the traditional purushartha-s of dharma, artha, kama and moksha. The Taliparamba veera srinkhala was important also from the point of view that, unlike such other gifts, it could be worn before any king, for it was supposed to be given by Siva himself, known in that temple as King of Kings.
Madhava Chakyar also received awards from the central Sangeet Natak Akademi, the Kerala Sangeetha Nataka Academy, the Kerala Kalamandalam and the Kalidas Academy at Ujjain. The Government of India honoured him with a Padma Shri in 1974, while the Madhya Pradesh Government awarded him its prestigious Tulsi Samman in 1986.
Madhava Chakyar was married to Kunjinmala Nagyaramma, a cousin. He had four sons and daughters, of whom Narayanan Nambiar is a famous mizhavu player and reciter of padhakam, while P.K.G. Nambiar is a Hindi pandit and a proficient performer in Chakyar Koothu and Koodiyattam.
(Reproduced from Sruti 71, August 1990.)
Posted by Sruti Magazine at Tuesday, February 14, 2012