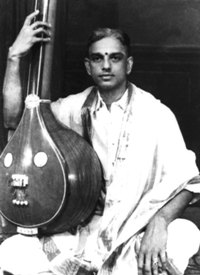 He was derided as ‘the graduate singer’ (thanks to his BA Hons) or the ‘talkies bhagavatar’—he was briefly a matinee idol in films—by the so-called cognoscenti of his time, before he stole the thunder from his peers and seniors, rising to the top of the popularity chart in Carnatic music.
Blessed with a wonderful, sonorous voice that easily traversed two octaves from the panchamam of the lower to that of the higher, GN Balasubramaniam easily reached out to huge audiences in the pre-microphone era. His voice had depth, volume, timbre and flexibility; it was a briga sariram with the ability to roll out swara phrases of different kalapramana and melodic texture with extreme fluidity. His was a brilliant synthesis of the vocal and nagaswaram styles of music.
Yet GNB, largely self-taught and a worshipper of Ariyakudi, his manasika guru, was a true exponent of raga music, fashioning an independent trail through the well-structured raga alapana explorations preceding his grand ragam-tanam-pallavi essays. Almost alone among vidwans of his generation who had adopted the Ariyakudi model of relatively brief alapana, he spent close to an hour on such elaborations, setting up ‘base camps’ of nyasa swaras on his step-by-step ascent.
A respecter of tradition, GNB was a brave innovator as well, bringing to light rare ragas and compositions. He courted controversy by performing srutibhedam or the modal shift of the tonic in his concerts, before the experts committee of the Music Academy officially endorsed it. Ironically, his schoolmaster father GV Narayanaswami Iyer, a knowledgeable and articulate patron of music, had been a vocal opponent of the practice.
GNB was an intellectual among musicians, with deep knowledge of Hindustani and western classical music and genuine respect for practitioners of these systems. A devout devi upasaka, he was an intuitive and classy composer as well, his contributions to the Carnatic repertoire often showcased by his disciples and other musicians. His fan following among musicians is perhaps unparalleled by any vocalist, and though some of the best of his devoted disciples died young as he did, the sishya parampara is alive in the surviving students and their disciples, as well as other admirers of his bani.
Posted by Sruti Magazine at Friday, May 25, 2012