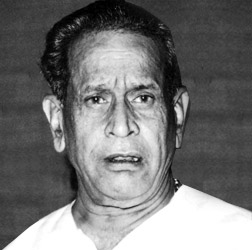 The inimitable vocal music of Bhimsen Joshi was an amalgam of meditative depth, incredible taan-s, perfect laya control and absolute swara precision.
He worked assiduously for decades at making the Kirana gharana his own, incorporating the influences he had sought all his life from all the masters he admired, no matter what school they belonged to.
To many faithful followers of Bhimsen Joshi’s music, his voice, even at its most resonant, had a rare intimacy, somewhat reminiscent of the effect the voices of Amir Khan or D.V. Paluskar had on them. Heard live, it reverberated from the stage to the last row of closed halls and open spaces alike, its sheer power captivating the audience. In recordings, its almost paradoxical tenderness never failed to suffuse listeners with a feeling of other-worldliness. (For over a decade through the seventies and eighties of the last century, Joshi was a victim of alcoholism, which affected his music adversely).
A typical Bhimsen Joshi concert during his best years was a slow awakening from a trance, deep immersion in the music gradually unfolding to give way to incredible displays of immaculate vocalisation in three octaves, perfect control of swara and tala, and acute sensitivity in shaping the aesthetics of the raga that he explored to the hilt.
Born on 4 February 1922 at Gadag, Karnataka, and music-mad from early childhood, Bhimsen Joshi scaled heights in Hindustani classical vocal music that few could equal. All his life, he remained deeply committed to raga music, strongly grounded in its traditional base, exhaustive, intense, deeply felt, even as his music underwent many significant changes while he evolved as a musician.
His obsession as a child with music frequently led to his disappearance from home, as he followed passing bhajan groups as if hypnotised, only to be restored to his parents by friends, even the police. He eventually ran away from home after listening to an Abdul Karim Khan recording – a thumri in Jhinjhoti.
Bhimsen wandered from place to place in search of a guru, mostly travelling ticketless by train. After unsuccessful visits to several cities, he reached Gwalior after three months, all along entertaining his co-passengers with songs he had learnt from gramophone records.
Bhimsen then travelled to Kharagpur, Calcutta, Delhi and finally Jalandhar, trying to learn from several great masters. He returned home when Vinayakrao Patwardhan, a great exponent of the Gwalior gayaki, who had come to Jalandhar to participate in the annual festival, advised him to seek out Sawai Gandharva, Abdul Karim Khan’s disciple, staying at Kundgol, a village not far from Gadag.
The tutelage under Sawai Gandharva, lasting five years, was arduous – full of menial asks before Bhimsen convinced the guru of his seriousness of purpose – but rewarding. He accompanied Sawai Gandharva on his concert tours and also heard the recitals of several contemporary greats from all over India. His concert in Pune, on the occasion of the sixtieth birthday of Sawai Gandharva, in January 1946 was the starting point of his meteoric rise to fame.
His relatively limited repertoire of raga-s never posed a major problem for his followers, for his rendering of these raga-s was each time replete with fresh ideas and interpretations. His Todi, Darbari and Miyan ki Malhar were perennial favourites, but his Gaud Sarang, Suddha Sarang and Brindavani Sarang, his Suddha Kalyan and his thumri-s in Jogia and Bhairavi were no less enchanting.
A versatile, peripatetic musician who blended the best of north and south in Hindustani music, he sang for the purist and lay rasika alike, taming a magnificent voice to produce flawless music. His breath control was legendary. He loved fast cars and travelled at the speed of light, performing tirelessly for over four decades.
Posted by Sruti Magazine at Saturday, May 26, 2012