Who’s who of Indian classical music 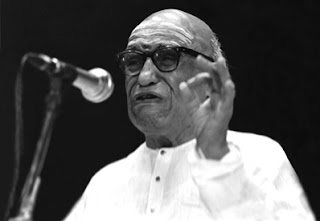 He was the pitamaha, the patriarch of Carnatic music. His singing was powerful, deeply moving. His profound scholarship never hampered his creative genius. He was a star in the midst of outstanding contemporaries like Ariyakudi Ramanuja Iyengar, Madurai Mani Iyer, Musiri Subramania Iyer and G.N. Balasubramanian. He battled a gruff and nasal voice all his life and managed to produce grand music despite having to fight those wayward vocal chords every inch of the way.
Through that gruelling vocal odyssey, it often seemed he was pleading with God, even altercating or wrestling with Him as he struggled to overcome his handicap.
It could not stop Semmangudi Srinivasa Iyer from becoming arguably the top Carnatic musician of the 20th century.
If Ariyakudi Ramanuja Iyengar shaped the structure of the modern Carnatic music kutcheri, Semmangudi defined its grammar and aesthetics. Gamaka and bhava predominated while briga and swara jugglery were to be foresworn. There was no room for thrills and spills in it, crooning was anathema to him. There can be little doubt that the Semmangudi influence has been responsible for the dignity and majesty that true lovers of Carnatic music associate with it.
Born at Semmangudi, near Kumbakonam, to Radhakrishna Iyer and Dharmambal on 25th July 1908, Srinivasan showed musical promise early, when he was five years old. The village had no music teachers, and little Srinivasan had to move in to his teacher Sakharama Rao’s home at Tiruvidaimarudur. According to Semmangudi, Sakharama Rao was a saint, “though a martinet” when it came to matters musical.
Violinist cousin Narayanaswami Iyer who was his next guru once thrashed Srinivasan for singing a phrase that revealed that he had secretly listened to a musician from a different, unacceptable school.
That was only a short term embargo—until the young pupil mastered his own tradition enough not to be corrupted by other influences. In his grown years, not only did Semmangudi internalise the best practices of the time, but also encouraged individuality in his own students.
When Srinivasan’s adolescent voice broke, it turned so harsh that his maternal uncle Tirukkodikaval Krishna Iyer advised him to switch to playing the violin.
That did not deter the young man. He was determined to conquer his recalcitrant voice. He practised like a maniac (and in his senior years was to advise young aspirants to practise, practise, practise).
Srinivasan became a sishya of Maharajapuram Viswanatha Iyer, who treated him like a son and denied him nothing by way of musical exposure. The disciple imbibed much from Viswanatha Iyer while accompanying him on the concert platform, but eschewed his flashy ornamentation and his partiality to Hindustani raga-s.
Once he made his concert debut in 1926, Semmangudi gained much support from senior accompanists. His progress was nothing short of phenomenal. He was at 39 the youngest Carnatic musician in history to be crowned Sangita Kalanidhi by the Madras Music Academy.
Semmangudi attributed much of the emotional depth and comprehensive understanding of every raga he explored to the great nagaswaram music he heard at this formative stage of his life from such giants as Mannargudi Chinna Pakkiria Pillai, Kumbakonam Sivakozhundu, T.N. Rajaratnam Pillai, Veeruchami Pillai. Harikesanallur Muthiah Bhagavatar was responsible for Semmangudi being invited to Travancore to help him edit, notate and publish the compositions of Swati Tirunal. Succeeding Bhagavatar as Principal of the Swati Tirunal College of Music, Semmangudi made a monumental impact on the Carnatic music scene in Kerala.
Decades later, Semmagundi was to be dragged into a controversy with Veena Balachander who attributed Swati Tirunal’s compositions to the Tanjavur Quartet. He was involved in at least one other major dispute, when he crossed swords with M. Balamuralikrishna over his claims of creating new raga-s.
Semmangudi was a generous teacher who trained three generations of sishya-s. Students who stayed at his home remember his marvellous alapana-s alone at night, usually after a concert.
Posted by Sruti Magazine at Wednesday, May 30, 2012