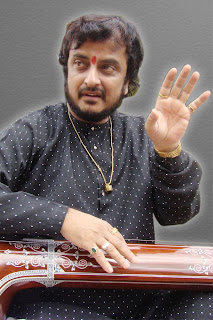 Presenting three entirely different styles of singing within the same gharana on three consecutive days, the Gharana festival this year was a brilliant coup by Prakriti Foundation.
After Vinayak Torvi’s strong, deep voice filled the Kalakshetra auditorium on Wednesday, the audience would have been forgiven for expecting a bit of a dilution in the auditory experience yesterday.
Vocalist Kaivalya Kumar Gurav obviously had other ideas. His thorough enjoyment of his music, his unconscious abhinaya to suit the mood of the song, and his superb body language resembling a seated dancer, added a tremendous additional dimension to his own brand of the Kirana gharana. His sweet voice, sometimes reminiscent of Abdul Karim Khan’s, could not have been more different from Torvi’s deep bass, but it moved easily back and forth from meditative to lilting to piercingly plaintive.
A touch of folk especially in the excitingly high notes only served to enhance the classicism at the core of his musicianship in evidence yesterday.
Though I have left the details—even raga names—to the Sruti critic covering the festival, I cannot help mentioning here that the raga Gavati, with which Gurav opened the concert, is not often heard in Chennai, though the charismatic GN Balasubramanian brought it south more than a half century ago. (Last year, Uday Bhawalkar sang it at the Music Academy).
Kaivalya Kumar also purveyed a delicate jhoola which literally swayed the audience.
The music on offer was clearly idiosyncratic, but what delightful idiosyncrasies. Every phrase he uttered was a pure distillate of the raga, every curve, every rapid ascent firmly anchored in the sruti with the individual notes crystal clear, however complicated the chain of swaras. 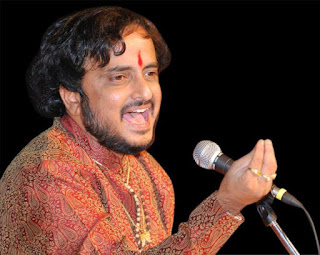 When in contrast the singer held a single note in a single long breath, he did so in a mesmeric manifestation of his mastery of omkara.
Even the unusual combination of vowels he blended together to serve up incredibly fast taans was always in good taste and always musical.
From vilambit to drut, there was never a false note, nor a dull moment in a sometimes earthy, sometimes majestic, sometimes playful, sometimes soulful journey.
It was obvious that singing is child’s play to Kaivalya Kumar, with complete mastery over the rules of the game refusing to obliterate the fun element.
It was priceless rasanubhava, in whose exploration the tabla (Shridhar Mandare) played an alert, sensitive part.