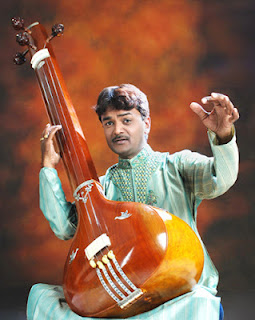 Jayateerth Mevundi’s vocal concert on 26 June as part of the Gharana series organised by Prakriti Foundation at Kalakshetra was an excellent display of the young musician’s sonorous voice and near-total control over it. So reminiscent of his guru’s guru Bhimsen Joshi, Mevundi possesses a natural gift in his voice, but years of dedication and hard work were obvious in the effortless manner he traversed nearly three octaves without ever sacrificing musicality, without ever diluting the essence of the raga or deviating from it. He may sound imitative sometimes, but no one can fault his smooth, fluent vocalisation that strives to reach for the ultimate in his gharana.
Two thoughts struck some of us during the concert. Even granting that Hindustani music is fundamentally different from Carnatic in the way the voice is used, it was disappointing that more of the young Carnatic vocalists of the city did not attend the programme, which could have inspired them to aim for sruti perfection and powerful yet mellifluous projection of the voice in their own careers.
Was the concert not publicized well? Or are our young vocalists not interested in music of other genres? (That Hindustani musicians can hardly be expected to return the compliment is quite another matter. We are concerned with what our youngsters can gain from attending such concerts and exchanging some notes perhaps).
The handful of Carnatic vocalists present agreed that Mevundi’s voice could be described as a briga saariram (as is the vogue in Carnatic music), a well-oiled one that did not strike a false note at any stage, and remained perfectly wedded to the sruti throughout the concert.
From mandra sthayi to tara sthayi, it followed a well structured ascent and vice versa, was beautifully modulated throughout and never lacked in tasteful creativity.
Mevundi’s rare forays into swara singing were marked by delicate touches to highlight the raga swarupa, and his volleys of fast taans were again always well-controlled. Not a harsh note anywhere. The whole performance, which probably fell only marginally short of being labelled a great concert, was nonetheless a triumph of melody and voice control. An object lesson for any willing young student of music.
The second thought had to do with the entirely unsatisfactory practice prevalent in Hindustani music of harmonium accompaniment. The instrument simply cannot reproduce the gamakas of Indian classical music, yet has survived through centuries.
With no disrespect to the great exponents of the instrument through history, the lack of a parallel to the violin accompaniment of Carnatic music is a big minus point in Hindustani music. And the least a harmonium expert can do in a good concert is to refrain from trying to replicate every phrase of the vocalist. It is such a dampener of vocal brilliance.
In this particular concert, neither the tabla nor the harmonium was in the same league as the vocalist. Full marks to Jayateerth Mevundi for his triumph regardless.