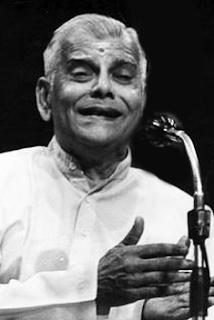 The late Sangita Kalanidhi KV Narayanaswami was and continues to be a role model for young vocalists in Carnatic music, for the sheer purity of his voice, his exquisite sruti suddham, and his mastery of raga and tala. The most complete and best known of Ariyakudi Ramanuja Iyengar’s disciples, KVN had the extraordinary ability to move his listeners with the emotional appeal of his chaste rendering of a wide repertoire of songs by a whole range of composers across languages.
It was said of his music that he became “immersed in his music, thoroughly forgetting himself and thereby providing a divine experience for the listener.” His career as a performing musician was in two parts, his strong vibrant vocalisation in the first phase being replaced after a major illness by an altogether mellower, softer style of singing, still based as much on complex, precise swara singing as nuanced rendering of alapana and niraval. His delivery of kritis was impeccable, too.
KV Narayanaswamy was born in the village of Chandrasekharapuram in Palakkad district in a family of considerable musical ancestry on an auspicious Friday, 16 November 1923. He was the second child of Kollengode Viswanathayyar, an accomplished violinist, and Muthulakshmi Ammal.
KVN started learning varnams and kirtanams under his father and grandfather at the age of five, joined school at Palakkad and studied there until the fifth form. He then continued his studies at Coimbatore. Around the age of twelve, he became attracted to theatre and cinema, playing the part of young Kannappan in the movie Kannappa Nayanar, a box office disaster that put an end to the lad’s acting ambitions.
KVN continued music lessons under Palghat Mani Iyer, C.S. Krishna Iyer, and Papa Venkataramayya. He was particularly fortunate in the interest Mani Iyer took in his progress. KVN’s mastery of the laya aspects of music in his adult years owed a great deal to this solid foundation. Not only was Mani Iyer a genius in the art of mridangam he was an accomplished vocalist as well. He taught KVN many songs, accompanying the boy on the mridangam during his practice sessions. What a marvellous preparation for a future as a concert musician!
When KVN started performing on stage, Mani Iyer accompanied him often, but an equally significant contribution by him was to introduce the young vocalist to Ariyakudi Ramanuja Iyengar, whose principal disciple KVN was to become in the years that followed. To the end of his life, KVN treasured the years he spent in gurukulavasam with Ariyakudi.
KVN made his bow at the annual Tyagaraja aradhana festival at Tiruvaiyaru in 1940. He learnt a great deal by keenly observing Ariyakudi’s stage performances. Each concert was a learning experience for him.
In 1946, a short while after KVN joined Ariyakudi, he was drawn to the freedom struggle inspired by Mahatma Gandhi’s leadership and left his guru for the ashram at Wardha, Maharashtra, but fortunately for Carnatic music, the inmates there persuaded him to return to music and Ariyakudi.
In 1947, he made his debut at the Madras Music Academy during its annual December season. The quality of his music that day impressed one and all into accepting him as a worthy successor to Ramanuja Iyengar.
Joining the Music College of Madras in 1962, KVN taught there for the next twenty years, before retiring as professor of music. He also taught and performed in the USA, where he first went to Wesleyan University in 1965 and later, in 1984, to San Diego University. He was the first Indian to be awarded a Fulbright scholarship for music.
Losing his wife Annapoornam in 1963, KVN later married Padma, his student at the Music College. After his retirement from the Music College, KVN took on a number of students whom he taught at home in a modern form of gurukulavasam. Many of them are carrying on the musical values he imparted with great affection.
Posted by Sruti Magazine at Monday, June 04, 2012