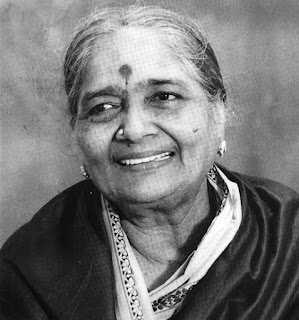 Sangita Kalanidhi DK Pattammal was a trailblazer among Carnatic vocalists. In the conservative south Indian milieu of the first half of the twentieth century, women were expected to take care of home and hearth, not venturing out even to practise the arts. Moreover, the performing arts, not considered very respectable in Victorian India, had just about emerged from the shadow of social stigma, and were now dominated by men. For all her remarkable precocity as a singer trained in the classical music of south India, young Pattammal would have gone the way of many upper caste Tamil girls, but for the intervention of the headmistress of the convent school she went to in Kanchipuram, an ancient temple city not far from Madras.
Pattammal was a fortunate exception to the social norms that kept women at home. Once her father Krishnaswamy Dikshitar became convinced that her musical talent should be displayed on the concert stage, there was no stopping her. She not only became the equal of men in areas the few women already performing had hitherto been allowed to enter, but went further and stormed the exclusive male bastion of ragam-tanam-pallavi singing and complex swaraprastara.
A sample of RTP by Pattammal:
Born in Kanchipuram on 28 March 1919, Damal Krishnaswamy Dikshitar Pattammal was over 90 when she breathed her last on 16 July 2009, her death bemoaned by the lifelong admirers of her sonorous rendering of unadulterated traditional Carnatic music, austere in intent and execution, crystal clear in enunciation, faithful to its creators in word and spirit, soaring in its adventurous exploration of the most complex rhythmic variations.
For all her immaculate pathantara, Pattammal’s early schooling in her chaste music was at best vicarious, learnt from the great gurus of her day by indirect assimilation Ekalavya style rather than through gurukulavasa, which her gender at any rate ruled out. Her virtual mentor Kanchipuram Naina Pillai’s impact led to her mastery of ragam-tanam-pallavi at a time when women singers were expected to confine themselves to song-rendering in a demure, proper manner. The brief tutelage with Ambi Dikshitar that came later meant that she would one day become synonymous with the Muthuswami Dikshitar oeuvre. Graduation through adulthood and marriage to direct learning from Papanasam Sivan gave her a command over Tamil compositions poignant in the visible bhakti of her exposition of those moving lyrics.
Pattammal renders a Sivan composition:
For all her orthodoxy, Pattammal took many a daring step in her youth, especially in her courageous espousal of the nationalist cause through song. She did not shy away from lending her voice to film songs either, provided the songs were based on classical music and had high meaning. They were usually of patriotic content. She gave new life to some of the best creations of poet Subramania Bharati in this genre.
Here’s a sample of a Bharati song by DKP:
Pattammal and her brother D.K. Jayaraman were a rare combination on stage, creating vocal excellence in a role reversal that meant the younger brother had to sing in a kind of falsetto to support the elder sister’s deep voice. It is only when Jayaraman started to perform solo that the real depth and range of his voice came into prominence.
Pattammal with DK Jayaraman:
While son Sivakumar is a mridanga vidwan, his marriage to Palghat Mani Iyer’s daughter resulted in the passing on of extraordinary musical genes to the next generation. Granddaughter Nithyashree Mahadevan is the best known among the musicians from the Pattammal lineage.
Pattammal was a much loved, respected teacher too. Many frontline musicians belonging to the Jayaraman school had the good fortune of learning from Pattammal too, especially after Jayaraman’s premature death. Vocalist Vijay Siva and violinist R.K. Shriramkumar are perhaps the most prominent of them.
Pattammal remained a loving and devoted teacher almost until the end. She listened to and appreciated good music of all kinds, including film music, jazz and opera, and even watched cricket, but her views on Carnatic music remained unwaveringly traditional, classical.
Posted by Sruti Magazine at Monday, June 11, 2012