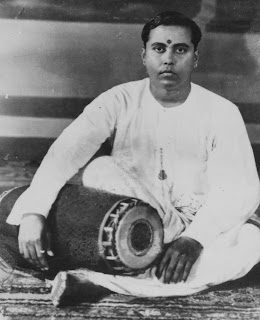 He was the only mridanga vidwan in the history of Carnatic music to have evoked comparisons with Palghat Mani Iyer, with his sensitive, nuanced percussion artistry. The leading exponent of the Pudukottai school of mridangam playing, Palani Subramania Pillai enjoyed a huge fan following in his all-too-brief life span, with not only his mastery of his art, but also his endearing personality and high principles.
“Illustrious son of an illustrious father (Palani Muthiah Pillai), he was a man of few words, of genial temperament,” said an admiring rasika, who also described his mridangam playing as “soft, almost like a caress,” among other things.
The left-handed Palani could play the khanjira with equal felicity and indeed performed on the hand-held instrument in tandem with Mani Iyer on the mridangam in many concerts made sparkling by the “brilliant conversations” between them.
He belonged to a distinguished line of percussionists, going back a couple of generations to Manpoondia Pillai, whose disciple Dakshinamurthy Pillai is still revered as a great exemplar for both mridanga and khanjira vidwans, in fact the ultimate benchmark for the latter.
For all that Muthiah Pillai was a renowned vidwan and teacher, he neglected his own son for quite a while, until Dakshinamurthy Pillai visited him one day and chided him for that after listening to young ‘Subbudu’ at practice.
This chance encounter set in motion a strict, almost cruel regimen for the boy, which started at 4 am and ended after ten at night. The youngster converted the punishing schedule into a quest for excellence that stayed with him all his life. His debut in 1923 as an accompanist to Mannargudi Rajagopala Iyer impressed one and all, even the grande dame of Carnatic music, Jayammal, and her daughter Dhanammal.
Dakshinamurthy Pillai was to become Palani’s mentor and father figure, with the relationship between guru and sishya marked by mutual warmth and affection. He was enormously proud of ‘Subbudu’s’ mastery, “his special affinity for the instrument”.
Chembai Vaidyanatha Bhagavatar played an important role in the growth of Palani’s career. At a time when the Tanjavur school of Palghat Mani Iyer was reigning supreme, he gave the young left-hander many opportunities to accompany him in concerts. He was said to be responsible for Palani’s transformation from a brilliant showman to a more sensitive, melody-oriented drummer of exquisite accompanying skills.
Palani went on to be paired with the giants of the day in the same, gentle, supportive style, reserving his expertise in ‘vyavaharam’ to the concerts of the likes of the kanakku-oriented Alathur Brothers. Even in such combinations, Palani never forgot his role as an accompanist, never projected himself.
Many instrumentalists—Dwaram Venkataswami Nayudu, Tirupamburam Swaminatha Pillai, T Chowdiah, MA Kalyanakrishna Bhagavatar and S Balachander, to name a few—sought him out as their accompanist for this very reason.
A great believer in young talent, Palani nurtured many sishyas with loving care. While many of them, like MN Kandaswami, Poovalur Venkataraman and Sangita Kalanidhi Trichy Sankaran went on to achieve distinction in their field, many others including stalwarts of the Tanjavur school admitted to being influenced by his art.
Palani Subramania Pillai missed out on being decorated with the Sangita Kalanidhi. He was “the great artist who won no honours,” but he was universally respected.
“There was class in everything about him,” violin maestro Lalgudi Jayaraman once said. “He brought dignity to the concert stage.”
Posted by Sruti Magazine at Saturday, June 23, 2012