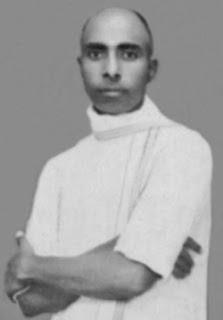 Rudrapatnam Krishna Venkatarama Sastry was born on November 10th 1907 to Rudrapatnam Krishna Sastry—musician, Harikatha artist, playwright and Sanskrit and Kannada scholar—and singer Sannakka, daughter of vainika-violinist Bettadapura Narayanaswamy, in the early years of the 20th century, at Rudrapatnam, a stone’s throw from the waters of the sacred river Kaveri. Venkatarama Sastry—whose birth centenary was celebrated in 2007-2008—showed early signs of musical talent, which his father nourished by exposing him to the best available training with distinguished gurus.
Venkatarama Sastry’s family from the Hassan district of Karnataka belonging to the Sanketi community went on to produce some nine more musicians at last count, with Sangita Kalanidhi R.K. Srikantan still going strong with his magnificent voice at the age of 92.
After spending more than a decade learning violin from Veena Subbanna and Mysore T. Chowdiah, Venkatarama Sastry moved to Madras in 1936, to join All India Radio when it was formed.
While some old timers believe that Venkatarama Sastry’s violin playing resembled his guru Chowdiah’s seven-string style, grandson and top ranking Carnatic violinist R.K. Shriramkumar does not entirely agree. According to him, Venkatarama Sastry came under the influence of Papa Venkataramiah soon after moving to Madras and eschewed the seven-string instrument in favour of the orthodox four-string violin.
His music was predominantly shaped by all the best vocalists of the day. Sastry insisted that the violin should always be based on the vocal style. He stressed bhasha gnanam or knowledge of languages and the primacy of sahitya, often citing the example of M.S. Subbulakshmi, whom he accompanied for years.
“Don’t pronounce words in a contrived manner,” he advised disciples, “respect languages.” He learnt a large number of songs in his lifetime and because he wanted Shriramkumar to follow in his footsteps, sent him to D.K. Jayaraman to learn vocal music.
He was a strong votary of the significance of the works of great sahityakartas, and the importance of the way the lyric and the music should fuse together. He firmly believed that the sweep and grandeur of the great ragas could be internalised only by learning a vast number of compositions. Sastry taught his students several kritis and believed in the aural tradition. “No tapes, no notebooks.”
Venkatarama Sastry insisted that the violinist savour the words, running through them repeatedly in the mind while performing niraval. It is the importance of this aspect of violin playing that led Sastry to enrol his own grandson Shriramkumar with V.V. Subramanyam for specialised violin coaching.
Tyagaraja was God to him. He performed at the annual aradhana at Tiruvaiyaru for 40 successive years. Vedanta interested Sastry deeply. He refused to move out of his Nungambakkam residence in order to stay close to Kalyanasundaram Sastrigal’s Vedanta classes he attended in the neighbourhood.
Sastry demanded that his students play only the compositions of the great vaggeyakaras of Carnatic music. The songs of the Trinity, Purandaradasa, Tevaram, and Tiruppugazh were examples of verses he approved. An advocate of the classical and ghana ragas, his tastes in violin music tended to err on the side of the conservative.
In later years, he was a great admirer of T.N. Krishnan’s music, which he recommended as an ideal to be followed. In vocal music he appreciated the titans of his time—Ariyakudi, Semmangudi, Musiri, Brinda-Muktha and M.S. Subbulakshmi.
R.K. Venkatarama Sastry was respected by everyone throughout his career. A principled, non-controversial figure, he brought dignity to whatever he did—whether accompanying MS or Semmangudi on the performance stage or expressing his views as a member of the Experts Committee, spending whole days at the Music Academy.
Posted by Sruti Magazine at Thursday, July 05, 2012