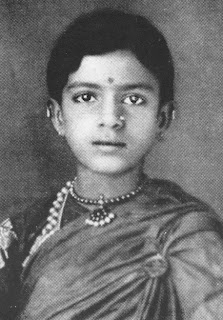 MS Subbulakshmi (1916-2004)
“She carries a veena in her throat!” Eminent veena vidwan Sambasiva Iyer was to exclaim in sheer wonder after listening to the 17-year-old debutant at the Music Academy. Roaring his approval with “bhesh’ and ‘shabash’, Chembai Vaidyanatha Bhagavatar attributed her prodigious display to her good karma in an earlier birth.
As in so many other instances of serendipity in the history of Carnatic music, the youngster was a last-minute stand-in for an indisposed Ariyakudi Ramanuja Iyengar.
Impressed as they were by the girl’s sweet voice and obvious talent, few of the cognoscenti who listened to her that December afternoon could have guessed that Madurai Shanmukhavadivu Subbulakshmi would one day become an unparalleled icon in Carnatic music, certainly the most decorated of them all.
Timid, fearful little Subbulakshmi had won the hearts and minds of the several stalwarts in that august gathering at the mecca of Carnatic music.
The year was 1933, and the shy girl from Madurai, daughter of veena vidushi Shanmukhavadivu, had come a long way from her humble home in the temple town of her birth and childhood.
Before she took the Music Academy by storm, she had been around on the concert stage for a while, starting with her earliest appearances on stage along with her mother. Film director K Subrahmanyam was the man who first spotted her talent and gave her her first cutcheri break—at the Kumbakonam mahamaham festival in 1932.
About her childhood, MS said, (excerpted from Past Forward by Gowri Ramnarayan, Oxford University Press, 1997): “I spent my childhood in a tiny house wedged between a row of tightly packed houses. This was in Hanumantharayan street, very close to the Minakshi temple. Oh yes, it is still there! The street is just as narrow, dusty and crowded now as it was in those days. The little lane was often occupied by cows which refused to budge. Certainly no cars could get by. The cows would sit comfortably and chew on, pretending not to hear the shouts and the honks.
“But it was a special place for musicians because of my mother, Shanmukhavadivu. She played the veena. It is an ancient musical instrument. In paintings and temple carvings, you will see it in the hands of Goddess Saraswati. The tone of the veena is both rich and sweet. It is supposed to calm the mind, and bring good thoughts. I know this is true because that is how I felt when my mother practised and performed on the stage. 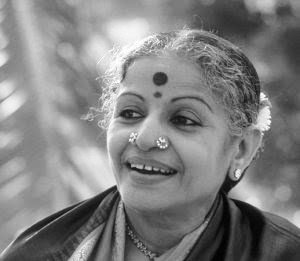 “The initials before my name, stand for the two influences on my life—M for my hometown, Madurai, and S for my mother, Shanmukhavadivu. She was my first guru. It was she who made me the singer I am today.”
The initials MS would one day spell magic for millions of music lovers. Her move to Madras and marriage to freedom fighter T Sadasivam played a major part in her transformation from a talented singer to a devout—and worshipped—national figure identified with Bhakti and spirituality. If MS agreed to act in films to raise money for her husband and his partner Kalki Krishnamurthi to start Kalki magazine, Sadasivam masterminded her growth and development as a musician of high aesthetic and spiritual values, and Kalki did his bit as a journalist with brilliantly executed criticism and publicity for her great art.
Over the decades, MS benefited from the mentorship of some of the finest musicians of her time—Pudukottai Dakshinamurthi Pillai and Musiri Subramania Iyer included. Semmangudi Srinivasa Iyer was her guru for the major part of her life. While widening her repertoire under Sadasivam’s expert stewardship to include music from all parts of India, and incorporate the best from specialist banis, she sought out the help of experts in the field, from Dilip Kumar Roy and Siddheswari Devi to T Brinda and Nedunuri Krishnamurti—and many more. In the latter part of her career, she struck up a brilliant partnership with composer Kadayanallur Venkatraman, who tuned many of the devotional and classical songs she made her own. An example was the Balaji Pancharatna Mala based on the lyrics of Talapaka Annamacharya.
MS could also play the veena, knew bharatanatyam, sang for the famous duo of daughter Radha and her cousin Anandhi, and was a staunch supporter of the Tamil Isai movement. Honoured with the title of Sangita Kalanidhi at age 52, she went on to earn fresh laurels all her life, with the Bharat Ratna, India’s highest honour the jewel in her crown. With Sadasivam’s active encouragement, she gave away most of her earnings to charity.
Her performances at overseas venues like the UN and Carnegie Hall, several American cities, Edinburgh, Moscow, Tokyo and Bangkok, to name some of them, made her an international figure, with her vast legion of admirers including western musicians as well as her Hindustani counterparts in India. Her stepdaughter Radha Viswanathan gave her invaluable assistance as her vocal accompanist for most of her career. India’s nationalist leaders were all her fans, too. Sarojini Devi surrendered her title of Nightingale of India to her, Mahatma Gandhi once said he’d listen to her speak a song rather than someone else sing it, and Jawaharlal Nehru said: “Who am I, a mere prime minister, before the queen of song?”
Posted by Sruti Magazine at Wednesday, July 18, 2012