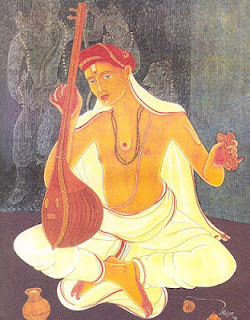 Tyagaraja was one of the greatest composers in Carnatic music. Known as the ‘pitamaha’ of the realm, he became part of a miraculous trinity of the greatest composers in the tradition-the other two were Muthuswami Dikshitar (1775-1835) and Syama Sastry (1762-1827)-born in the same little town of Tiruvarur, within a few years of one another.
Tyagaraja was born to Kakarla Ramabrahmam and Sitamma, a Telugu brahmin couple, at the home of his maternal grandfather Giriraja Kavi, a poet-composer in the court of the king of Tanjavur. He was named after the presiding deity of the temple at Tiruvarur.
Tyagaraja began his musical training under Sonti Venkataramanayya, a noted music scholar and court musician, at an early age. Music was a spiritual pursuit for him, his expression of his devotion to his favourite god, Rama. From a talented and devout singer, he eventually became a composer. Singing the praises of Rama was reward in itself for him, so much so that he refused lucrative offers to become a court musician. His rejection of worldly success and wealth in favour of the service of Rama is beautifully encapsulated in the famous song Nidhi chala sukhama in the raga Kalyani. “His lyrics reveal great depth of knowledge of the sciptures, epics, legends, purana, musical expertise, his humility as well as self-respect, introspection, and sense of humour,” says The Illustrated Companion to South Indian Classical Music (by Ludwig Pesch, Oxford University Press, 1999).
Tyagaraja was a prolific composer who had a major impact on the development of the south Indian classical music tradition, the structure of the typical Carnatic music composition, in particular. He developed the kriti as we know it today from the kirtanas belonging to the utsava sampradaya or tradition of festivals celebrating gods.
To Tyagaraja is attributed the origin of the present pattern of the kriti consisting of the pallavi, anupallavi and charanam, the song developing upwards from the opening or pallavi towards the middle part or anupallavi and concluding in the charanam. All three portions of the song, which occur in seamless progression, are marked by sangatis or melodic and rhythmic variations on the lines of verse that make up the song. The sangati is regarded as Tyagaraja’s major contribution to Carnatic music.
While Tyagaraja composed kirtanas in the bhajana tradition as well, but predominantly kritis in over 200 ragas-including several he created-he was also responsible for Prahlada bhakti vijayam and Nauka charitam, musical narratives of myths in the operatic style. Most of his compositions were in Telugu, a language brought to Tanjavur from migrants from Vijayanagar in present-day Andhra Pradesh.
His pancharatna kritis are five compositions in the ghana ragas Nattai, Gowlai, Arabhi, Sriragam and Varali, which crown the annual Tyagaraja Aradhana at Tiruvaiyaru where his samadhi or final resting place is situated.
Tyagaraja sang his compositions facing Rama’s idol while his disciples wrote the lyrics down on palm leaves, which were handed down to future generations of disciples in an unbroken thread. Though he is said to have composed thousands of songs, only some 800 or so have survived.
Today, the Tyagaraja aradhana is celebrated in several parts of the world and he is widely known as Tyagaraja Swami, the saint composer.
Posted by Sruti Magazine at Thursday, July 19, 2012