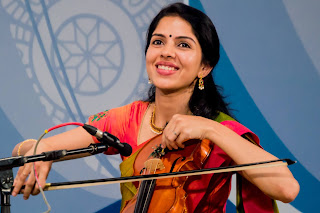 Twenty-year old Charumathi Raghuraman is among the more talented young violinists on the Carnatic music scene.
Born in Mumbai in 1987, Charumathi, who had access to her elder sister Rashmi’s violin, showed musical awareness and grasp even as a five-year-old. Her mother, a music graduate and vocalist, noted that Charumathi exhibited inborn musical awareness and grasp from the age of five. She was placed under the care of Guru N. Krishnan (BRRS, Mumbai). When she was eight, Sangita Kalanidhi T.N. Krishnan spotted Charu in a violin workshop at NCPA, Mumbai, and graciously offered to train her. Charu made repeated trips to Chennai over the next four years to have a grounding in sound violin technique. She shifted permanently to Chennai in 1999 for further learning. In vocal music, she had early grooming from eminent teacher T.R. Balamani of Mumbai. She has been pursuing vocal music training under Sangita Acharya P.S. Narayanaswamy for the past seven years.
Charumathi Raghuraman’s ancestors hail from Tanjavur, the cradle of Carnatic music. Charu’s mother Rama Raghuraman groomed her systematically from an early age. Her 87-year old grandmother played the violin at a tender age.
Charu has now been performing in the kutcheri circuit for over seven years. She has accompanied many established vocalists in all the major Chennai sabha-s. She has also toured the country extensively as a soloist as well as an accompanist. She has also preformed with her guru T.N. Krishnan on a few occasions.
A CCRT, GOI scholarship holder in violin from 1998, Charumathi is a B-high graded artist of All India Radio, Chennai. She is the recipient of many awards for violin play from The Music Academy (Madras), Sri Krishna Gana Sabha, Narada Gana Sabha, SAFE, Indian Fine Arts Society and other organisations. Her recorded music includes CDs as solo and accompanying violinist.
A graduate in Information Management Systems, Charumathi is planning to pursue higher studies. Cricket and tennis are her favourite sports. According to her family, “she has to be often woken up from her reverie and reminded of her own concerts, when she is immersed listening to ghazal-s by Ghulam Ali, Mehdi Hassan, or Hariharan. She has won prizes in Hindustani vocal music, table tennis and bike racing!
pc: S. Hemamalini
Posted by Sruti Magazine at Monday, September 10, 2012