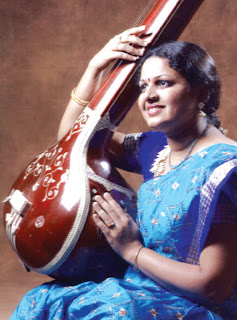 In the early decades of the last century, Carnatic musicians were dispersed widely over Tamil Nadu as well as other states of south India but over the last seventy years or so, Chennai has become the most important centre for classical Carnatic music and a large majority of artists have shifted base hither for their livelihood. Bengaluru may come as a distant second in this regard to Chennai at present, but coastal Karnataka has not been quite the place for Carnatic music. This prompted Botany professor Aravinda Hebbar, father of Ranjani Hebbar, to found the sabha ‘Ragadhana’ in Udupi with a few like-minded persons. Set up 23 years ago, the sabha has hosted artists from all over Karnataka and Tamil Nadu as well as other places in India.

As Aravinda and his wife Vasanthalakshmi are musically trained, Ranjani grew up in an environment of music. At the age of five, she could identity many raga-s. She is one among a handful of talented young vocalists to emerge from the Mangalore-Udupi area of Karnataka. Last year she married software engineer Guruprasad who was employed in Bangalore, but the couple have recently shifted to Chennai.

Initially trained by her parents and thereafter by vidwan Madhoor P. Balasubramaniam, Ranjani attracted the attention of vidushi S. Sowmya, during a concert she gave in the Udupi sabha. She requested Aravinda to send her to Chennai for training with her; Ranjani was only twelve then and the year was 1996. During vacations as well as long weekends, Ranjani travelled to Chennai and underwent tutelage from Sowmya. When she passed the plus-two exams in 1999, she shifted to Chennai to be close to her teacher and, in due course, make a career for herself. Not only did her music flower but her practice sessions in the hostel where she stayed attracted the attention of the late S.V. Krishnan of ‘Naada Inbam’ (situated just behind the hostel). SVK had offered opportunities for many talented artists to perform in his sabha and in no time, she found herself performing regularly at Raga Sudha Hall, the home of Naada Inbam. Concerts in other sabha-s followed. Academically, she has a B.Mus. from Queen Mary’s College and an M.A. (Music) from Madras University.

In 2002, Sowmya suggested that Ranjani learn also from vidwan Chingleput Ranganathan to hone her laya skills. This training has helped her to perform pallavi-s and include mathematical formulations in her concerts. She has taken care to ensure that such attempts do not intrude into the melodic aspect of her music as ‘alapana’ and ‘bhava’ have been most important to her. An exceedingly sweet and pliant voice, good control over sruti and laya, and a pleasant stage presence are her attributes.

Starting her singing career at eleven, she has fifteen years of concert experience – she has sung three years in a row in the Music Academy, Madras. She has also sung in many sabha-s throughout India. She has received scholarships for an unbroken period of seven years from CCRT, Delhi, and the K.R. Sundaram Iyer Trust, as well as the HRD Fellowship of the Ministry of Culture of the Government of India. An ‘A’ grade vocalist of All India Radio and Doordarshan, she won the AIR music competition in 2000. The Kalki Krishnamurthy Award, 2007 was a prestigious honour and so have been the M.S. Subbulakshmi Award from Mysore and the D.K. Pattammal Award from Music Academy, Madras. ‘Isai Chudar’ and ‘Gaanamritadhaara’ are among the titles conferred on her. She was also among the teaching staff of the music school of the Academy.

Apart from three CDs already released, her live concerts have been recorded by the Chennai based Charsur and are available on the web.

Among her mentors, Ranjani mentions Vidwan T.R. Subramanyam, the late S.V. Krishnan and members of the K.R. Sundaram Iyer Trust.