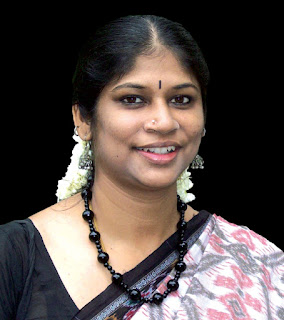 Vocalist Nandita Ravi is a chip of the old block. This only child of Rama and S. Ravi continues the tradition that her mother has been guarding zealously for decades. Rama Ravi had direct tutelage under the redoubtable Brinda-Muktha sisters and their cousins T. Viswanathan and T. Sankaran, besides B. Rajam Iyer and D.K. Jayaraman. If anything, Nandita has done even better. She has imbibed the distilled essence of all these masters from her mother, besides Sangita Kala Acharya (Bombay) S. Ramachandran, inheritor of the accumulated wisdom of the Dhanammal clan, and Sangita Kalanidhi-s Musiri Subramania Iyer, Chittoor Subramania Pillai and Tiruppamburam Swaminatha Pillai. What better pedigree would one want? She also learnt from the late D.K. Pattammal for a couple of years, the icing on the cake.

Nandita is a late bloomer at a time when young musicians start to perform in their mid-teens. She gave her first public recital when she was 22 – at Sri Krishna Gana Sabha, Chennai. Well attended, the concert was a success (this writer too attended it) but the youngster did display a certain nervousness. Today, after many performances, she is still shy and somewhat laid back – traits largely absent in today’s youngsters.

Nandita’s care till she was five was in the hands of her grandmother Tulasi Ammal (Rama’s mother), as Ravi, a Railway Officer did service in Zaire, Kolkata and Delhi after she was born. And at five, she had picked up sloka-s and simple songs from her grandmother. When the Ravis were in Kolkata, it was a very reluctant girl who joined her parents. But direct coaching by her mother and being present in her classes as she taught others was a boon to her. In Delhi, she trained with vidwan Gopalakrishnan. It is however in training under vidwan Bombay Ramachandran for ten years continuously that her horizon widened and her musical sensitivity flowered. From her mother too, she has learnt numerous padam-s and javali-s, besides kriti-s.

Nandita has performed solo and with her mother in concerts in India and abroad. As a solo vocalist, she is particularly popular in Kerala and Andhra, where she has given a number of concerts. She has won prizes for her performances in the Music Academy and Sri Krishna Gana Sabha. She is also a performer over AIR and some of her concerts are available over the Internet. She has a naturalness in her singing and her voice is exceedingly sweet in the tara sthayi. She sings in the higher octave while her mother sings in the lower one, a la sisters Brinda and Muktha.

Academically good too (B.Sc. and M.C.A.), Nandita worked for about two years in the computer education field, but in the dilemma over a career in computers and pursuit of music, music won. She followed up with M.A. (Music) in Queen Mary’s College and is now in the process of submitting her Ph.D. thesis on ‘Sanskrit composers of Dikshitar’s sishya parampara’, starting with Kumara Ettendra and Ambi Dikshitar and ending with Dr. V.V. Srivatsa. She has presented papers at IIT-Madras (Music of Syama Sastry), the Tamil Nadu National Music Conference at Chidambaram (Gopalakrishna Bharati), and an International Music Conference in Chennai (Sanskrit compositions of Tyagaraja).

As a torchbearer of the Dhanammal bani, and a competent artist, does Nandita enjoy enough support from sabha-s? The answer, sadly is no; she certainly deserves much more.

Nandita has been teaching music, with about 20 students now. Some have been with her for ten years. At least a few of them can be expected to remain true to the unique style and propagate it in the years to come.

Nandita’s husband Vinod, a software engineer, is fully supportive of her endeavours.