A north-south dialogue on classical music 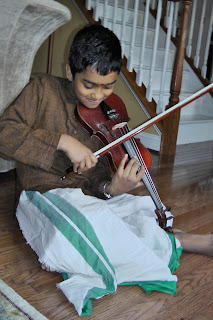 (Young Siddhartha has suffixed terms of respect to the names of all the musicians in this account; these may have been edited out for readability).

The Music Forum in collaboration with the Indira Gandhi National Centre for the Arts made an Agastyan effort on 8 September to bring Hindustani maestros across the Vindhyas by holding a daylong seminar on the Hindustani and Carnatic music systems at the Madras Music Academy.

The first question brought up was why North Indians do not listen to Carnatic music as much as South Indians do Hindustani music. Each musician expressed his or her opinion on the topic. Ajay Chakraborti said that everyone’s life was a mixture of tension and relaxation. He said that the sthithi on different notes and the emphasis on pure notes in Hindustani music bring about relaxation in the listener, whereas movement or gamaka on certain notes is the hallmark of the Carnatic system. North Indian listeners, he said, expect pure notes and do not have a comfort level with oscillations. He demonstrated the raga Kiravani in Hindustani, Carnatic and Jazz (jazz with Hindustani swarams was really intriguing, and if you heard him blindfolded, you would think he was a native of New Orleans). He showed the flavour of each system and stressed the predominance of complex oscillations in Carnatic music. This is why, he said, Carnatic music is not very appealing to the common untrained ear.

Ravikiran countered this statement by saying oscillations are also indeed “pure” by nature. He said that it is almost impossible to imagine some ragas like Ahiri, Sahana and Kedaragowlai without gamaka. “The kampitam is a part of the image of the raga,” he said. E must know the amplitude and external limits of a gamaka. Some oscillations are so subtle they don’t even reach out to the next note. Ravikiran also demonstrated that by changing the way we oscillate the dhaivatam in Ritigowlai we can obtain the ragam Sriranjani.


Dr. Narmadha discussed the contribution of MS Gopalakrishnan and the pioneering work of Parur Sundaram Iyer who brought Hindustani ideas into Carnatic music. The differences concerning elaboration were also discussed. “In Hindustani there is a ‘note to note’ type of elaboration but in Carnatic music there is more a ‘phrase to phrase’ elaboration.” Ravikiran said that ragas like Ahiri and Athana were extremely subtle. If these ragas are elaborated for more than three or four minutes in an alapana they become monotonous and literally collapse on to themselves.    After a satisfying (and free) lunch provided by the Academy, the instrumental session commenced. It started with Nayanji (who is a leading artiste in two instruments - the tabla and the sitar) speaking about the various Hindustani instruments - supporting and solo. He discussed solo instruments like the rudraveena which is used to play the dhrupad style of music, tabla, and sitar. The supporting rhythmic instruments include the pakhawaj that accompanies dhrupad music and the tabla, which accompanies khayal music. He said that in a vocal concert, the rhythmic support is provided by the tabla and the melodic support by the sarangi or harmonium. However, for an instrumental performance there is no melodic support unlike in the Carnatic system.

While in a typical Carnatic performance, the mridangam artiste plays a tani avartanam or at the end of the main piece, Nayanji said that in a Hindustani performance, the tabla gets smaller solos throughout the concert. These little solos are like answers to the main musician. The piece becomes a conversation between the main and supporting artiste, taking the aesthetics to higher and higher levels as the musical discussion progresses between the artistes. Nayanji said that the tabla must bring out the sentiment of the music in rhythm and inspire the main artiste to build the composition further. Otherwise, the tabla plays the teka or a standardized set of syllables for a taal, the equivalent of sarvalaghu in the Carnatic system. He said that a good tabla player needs to break the monotony of the rhythm and reinvigorate the music performance. “One of the most important jobs of the tabla is to display the vision of the main artiste,” he said.

In the third session, the percussive systems of both Carnatic and Hindustani music were discussed. First, Bikram Ghosh systematically demonstrated compositions in tabla playing. In the North Indian system, there are six different tabla gharanas. He said the basic unit in Hindustani is the matra, while in Carnatic it is the akshara. For example, he said, teen taal consists of 16 matras and would be equivalent to 32 aksharas or 64 depending on the intricacies the artiste wants to showcase. Bikramji said that we see that the mridangam brings out more intricacies in percussion. 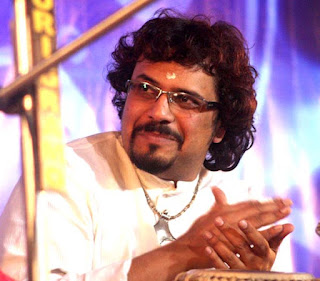 Bikramji continued to discuss the types of compositions in a tabla solo repertoire. There are two types of compositions - a theme/ variation composition and a fixed composition. The peshkar, kaida and rela were the theme/variation style compositions discussed in detail. A peshkar has a set variety of bols or syllables with extended resonant sounds like dhin and dha. Many maestros have elaborated peshkars much like the alap in instrumental music.

Nayanji contributed to this discussion and elaborated on some of Bikramji’s points. The kaida is a composition containing a limited number of bols and has two sections. In the bayan (left hand drum) uses an open sound in the former section and a closed sound in the latter. The reversal occurs in the middle of the matra cycle. Bikramji explained this khali-bhari or empty vs. filled concept. The cycle goes towards the bhari from a khali and returns. A progressional improvisation takes place here. Nayan Ghosh did a kaida with different levels of variations using a permutation and combination of bols. They also talked about the bund or locked kaida, a complex form which cannot be unlocked.

The last theme composition discussed was the rela. This is played in a high speed. It is like a roll of bols bursting like a deluge. Here too we saw the khali and bhari technique employed as demonstrated by the artistes.

Nayanji then said that fixed compositions are composed works that must be exactly reproduced from the composer. The first type discussed was the tukra. Bikramji demonstrated a tukra composed by his father. The gat, another fixed composition (which is more abstract) and the chakradhar were briefly discussed. Bikramji demonstrated a chakradhar by Feroz Khan.

It was now the turn of the Carnatic vidwans. Vidwan T.V. Gopalakrishnan explained the nuances of south Indian percussion. He mentioned that Carnatic music did not contain a variety of gharanas as in North Indian music and the style was more or less homogeneous (with the Tanjavur and Palani schools often borrowing from and enriching each other). Along with Dr. Narmadha he demonstrated the varnam Valachi vaachi in two speeds to contrast passive and active mridangam playing- one to keep the beat and a second, which was a more active playing for the music of the varnam played by the violin. 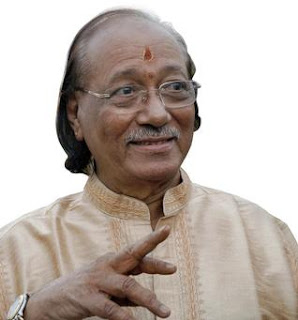 This informative and enjoyable seminar was wrapped up by an astounding tani avartanam by TVG Mama and Bikramji. It reminded me of the final rounds of fireworks in a Fourth of July celebration. The grand octogenarian played the mridangam with the vigour and sharpness of youth and was ably matched by his Hindustani counterpart. This fantastic rhythmic dialogue left the audience on the edge of their seats, open mouthed in amazement. On the stage, I noticed Music Academy’s logo - Saraswati sitting on a tilted lotus. An exhilarated Saraswati also seemed to be holding on to her lotus pedestal with all her might, as the rhythmic fireworks reached a crescendo.

Although many differences between the systems were discussed including such subjects as the spiritual content of compositions, compositional structure, and percentage of vocal vs. instrumental performances in both systems, the panel unanimously agreed that the intent of both systems was to present the raga lakshana in its entirety, either through niraval, alapana and swaraprastara or an unembellished composition like Brovavamma (a Syama Sastri composition in Manji) which is so complete that it requires no embellishment by the performer.

The discussion increased the understanding and appreciation of both systems and many lessons were learned from this debate. The panel asked for musicians and listeners to be more open minded. The Hindustani musicians wanted to incorporate the “putting of tala” to keep rhythm during lessons with students. Ajayji is already doing that with his students. Bikram Ghoshji incorporates mridangam arithmetic in his playing to give his tabla playing extra flavour and nuance. TVG sir said that Carnatic musicians could incorporate the aesthetics and delivery of Hindustani musicians. The North Indian musicians also appreciated the reverence to guru and tradition that the South Indians in general seem to have. The audience of course learned all of the above and one more important lesson: during the Q&A, a precise question posed without delay, is what keeps Dr. Pappu away (from abruptly stopping a babbling member of the audience).
Posted by Sruti Magazine at Monday, September 17, 2012