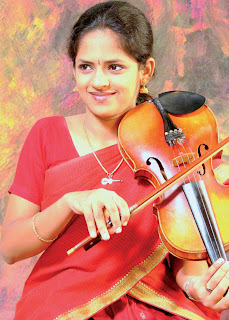 Being a ward or sibling of a celebrity is unenviable as you will always be subject to comparison – sometimes unfair, with the famous one. Twenty three-year old violinist Akkarai Sornalatha did face the problem of comparison with her famous sister Subhalakshmi, but in the last two years she has largely emerged from her sister’s shadow. Of course she still worships her sister who is also her role model but her prolific concert opportunities and rigorous practice have given her sufficient confidence to create a niche of her own in the music field. Her cherubic doll-like presence on stage does not take away from the solid accompaniment she provides to the main artists, some of whom are quite senior to her in age and experience. She has already accompanied, among others, such accomplished artists like Chitravina Ravikiran, Hyderabad Sisters and Gayathri Venkataraghavan. In a span of about seven years, she has played in more than a thousand concerts including quite a few recordings.

Hers is a musical family in the truest sense. Grandfather S.P. Siva Subramaniam was a versatile musician, adept at singing and playing the harmonium and mridanga. He was no mean composer either and his compositions are well structured, many with ornamentations like swara-akshara.

Grandmother Sornambal was a musician, music teacher and Harikatha exponent. Swamynathan is a violinist and a hard taskmaster while teaching music. He was primarily responsible for shaping his daughters although they learnt from other excellent gurus like O.V. Subramaniam and his daughter Padma Natesan in Delhi, and P.S. Narayanaswamy and Ravikiran after the family moved to Chennai in 1999.

Apart from individual concerts, the sisters have also given a fair number of violin duets. They combine effectively, with Sorna adopting the supporting role Subhalakshmi and Sornalatha have also presented a few vocal duets and here too, they score impressively. Of course, their individual commitments restrict their dual concert opportunities, although rasika-s and sabha-s have given thumbs-up for these.

In the space of the last five years, Sorna has won many prizes and awards such as the first prize in the ragam-tanampallavi competition conducted by SAFE in 2008, the Inter University “National First” award in 2006, Best Violinist award from Indian Fine Arts Society (2007), Lalgudi Gopala Iyer Award from Sri Krishna Gana Sabha (2008) and Vipanchi award of excellence from vidwan M. Balamuralikrishna in 2009. The titles of Kala Shree and Sangeeta Bhaskara have been conferred on her. Sri Shanmukhananda Sangeetha Sabha, Mumbai bestowed the title “Shanmukha Sangeetha Siromani” on both the sisters as well as a cash award of Rs. 25,000 in the year 2009.

Sorna has already travelled to many destinations in India and abroad, including the U.S.A., Australia and Sri Lanka.

A hard working girl with considerable talent, Sorna is also a much loved teacher to the many children who learn from her.