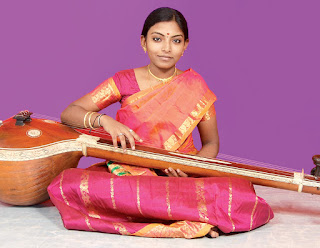 If you are not a disciple of P.S. Narayanaswamy, you should be a disciple of Suguna Varadachari – so goes the saying in the Chennai music circle of talented youngsters. Brindha Manickavasakan is a disciple of the latter.

Although born in Chennai, this daughter of a technocrat specialised in extraction of oil and gas based in Dubai, had her schooling there. After she passed the tenth standard, while father Manickavasakan remained in Dubai, the rest of the family shifted to Chennai to further Brindha’s training in music. Her parents were both passionately interested in the fine arts, in addition to being deeply involved in matters spiritual. They played gracious hosts to almost all visitors in these disciplines to Dubai.

Young Brindha, who received regular musical training from expatriates such as Jayasri Rao, D.J. Balakrishna and Kanakadurga Venkatesh, was also taught by many visiting musicians. Such diverse training increased her stock of not only standard classical fare but also many novel tukkada-s not heard from other musicians. Tiruppugazh songs learned from Vilasaini Karthik – a member of the ‘Tiruppugazh Anbargal’ group, also extended her repertoire.

After shifting to Chennai in 2006, Brindha started to learn from Dr. Manjula Sriram, an accomplished teacher who also taught the versatile Vasudha Ravi. This lasted for two years and on Manjula’s shifting base to Bengaluru, she came under the tutelege of Suguna Varadachari and, under her guidance, she has now turned into a fine young vocalist. Trained in the veena and Bharatanatyam too, she has, however, not found time to practise these regularly although she plays the veena occasionally at home.

December 2010 was an exceptionally busy month for her, with around fifteen concerts, a sort of record for a 21-year-old. Reviews of her concerts have been very positive, one of them even predicting that she would join the list of front-line singers in the space of three years.

She has released three music albums so far. She has been directly graded as ‘B-High’ by AIR, quite meritorious by itself. In last year’s contest for ‘The Carnatic Idol’, an event conducted by Jaya TV, she advanced till the ‘Super Six’ in the face of stiff competition. Besides Chennai, she has sung in a few other cities in India and, of course, Dubai. She has won awards and prizes from organisations as diverse as the Music Academy, Thyaga Brahma Gana Sabha, Papanasam Sivan Academy and Harikesanallur Muthiah Bhagavatar Trust besides various organisations in Dubai. The Parupalli Ramakrishnaiah Pantulu Award she recieved from vidwan M. Balamuralikrishna in 2009 is something very special to her.

Four years in Ramjhi’s Issai Mazhalai (that is how he spells the name of his organisation!) and frequent concert opportunities as a result, are also responsible for her success. Her younger sister Arulpriya is also a member of the Issai Mazhalai troupe.

A final year student in engineering, Brindha plans to get more involved in music after graduation.