On the Verandah…with Dikshitar and Vivaldi

Mississauga, Ontario has its own Benares. Surprised? 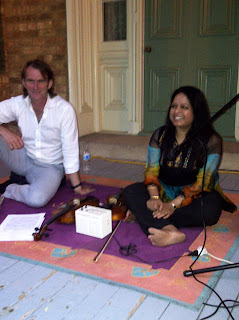 Benares is a house built in Mississauga, Ontario, in the mid 1800s by Edgar Neave which he named after the holy city. The theory is that being a smart land developer he had realized that retiring British army officers who had served in India were buying property in Ontario, and, giving real estate Indian names would be good marketing. The first buyer of the house was a Captain Harris who had served in India, though not in Benares. Captain Harris and his family who subsequently owned the property retained the name Benares. The property has been restored in recent years, and, has been declared a Historic Site.

During the short Canadian summer every year, music concerts are arranged on the verandah of the house and the series is known as On the Verandah. The performers sit on the verandah and the audience sits in the open space in front. The choice of music is fairly eclectic and in recent years, Subhadra Vijaykumar, a reputed Carnatic violinist, has been giving performances On the Verandah along with other musicians. On Friday, August 2, she teamed up with a co faculty of hers at the Royal Conservatory of Music, Toronto, Jamie Thompson, who played the flutes.

Storm clouds threatened the start of the programme with rain. However, a prayer to the Lord who removes obstacles, Sri Ganesha, composed by Muthuswami Dikshitar, ensured that the clouds cleared for at least long enough to get the programme going and the audience warmed up. And then, when the rains came mid way through the concert, everyone just got on the verandah, sat cross legged, thinnai style, and listened to Subhadra and Jamie play. By then the audience and the performers had got intimate enough…

In addition to giving interesting introductions to the songs and their genres of music, Subhadra and Jamie also provided a lot of information about the evolution of the instruments they were playing. Subhadra talked of Baluswamy Dikshitar’s role in developing the violin for Carnatic music, and, Jamie had many interesting facts to share about the evolution of different flutes, including the Bansuri.

Playing solo pieces and improvising impromptu jugalbandhi style playing, the duo kept the audience enthralled with pieces from composers like Muthuswami Dikshitar, Vivaldi and Albert Roussel (1869-1937). Roussel’s ‘Krishna’ which Jamie led on the flute gave the right setting to the evening as the sun came down, and, one could see Krishna, playing the flute, coming home with the cows, the red setting sun in the background and the dust kicked up by the cows (go dhooli ka samay). The two also performed a piece from Paul Horn’s (b. 1930) piece that he composed in 1968 when he sneaked a tape recorder into the Taj Mahal one night and played inside the Taj.

The concert ended with a beautiful rendering of Muthiah Bhagavathar’s English Note, a waltz tune, which for the first time I heard played on a flute. With the raindrops beginning to dance a light patter and the night just setting in, it set the right tone to what Subhadra calls ‘her pilgrimage to Benares.’