London is well into Shakespeare season now, and the theatre goer is besieged with opportunities to see classic and modernised versions of Julius Caesar, Othello, As You Like It and The Tempest to name a few.

But two contemporary productions, The Boat Factory and Chimerica, are the ones that truly portray the depth and breadth of the London theatre scene. Both productions excite the senses, tug at the heartstrings and examine human nature; but through entirely different lenses.

THE BOAT FACTORY is enacted by two players against a minimal set and in a tiny theatre at the back of a pub. The subject matter is introspective – a look at the lives of two people in a shipbuilding yard in Belfast.

It is a heartfelt first-person account of one shipbuilder, paradoxically combining nostalgia for the UK’s great manufacturing past with revulsion for the exploitative and dangerous conditions under which the shipbuilders worked.

All the roles are played by Michael Condron and Dan Gordon. Condron is the more versatile actor, slipping into different roles with ease, while Gordon makes up for a lack of flexibility with authenticity; he is also the playwright and the son of a Belfast shipworker.

The play is set around Davy, a young lad about to begin his first day of work at the shipyard.
He is accompanied by his surly, taciturn father and on his first day becomes involved in a mighty punch-up, before being put to work under an abusive superior who beats a fellow employee in front of his shocked eyes. The fight scene in particular is enacted with vigour, making you momentarily forget there is just a pair of them on stage.

Perhaps even more extraordinary is a scene where the protagonist meets a bow-legged fellow employee, Geordie Kilpatrick, soon to become his closest friend and confidante. The two of them are interrupted by their superior, a loud and unforgiving man and what follows is a masterclass in acting; the two actors share the three roles between them, effortlessly switching between the roles of the new boy, the bow-legged companion and the abusive superior, with just the aid of a bowler hat to distinguish the boss from his underlings.

The most moving scenes, however, are when the two main characters climb on to the crow’s nest of an unfinished ship. Bit by bit, Davy realises his companion is a poet and a dreamer trapped in the body of a crippled shipwright. Much of the play’s nostalgia is directed as much to the companion as it is to the shipyard.

In many ways, it is pointless to compare this with CHIMERICA, which is on another level altogether. It uses a large cast and an elaborate set to look well beyond Britain’s shores at the fractious and increasingly co-dependent relationship between the world’s foremost superpowers, China and the US.

The play is set in the cavernous Harold Pinter theatre and on the stage is an ingenious cube that turns to show its different faces: on one side a cramped Chinese living room, on another the front of a flower shop, on a third the front of a seedy strip bar in Chinatown in New York.

The scale, the professionalism, the set, the subject – all of it is on a larger scale than The Boat Factory.  And yet, it is missing something the smaller play has – a certain unquestionable honesty of purpose. 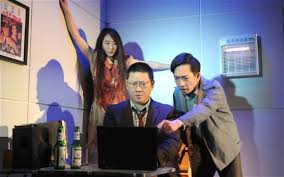 The starting point of the play, and the central image throughout, is Beijing’s Tiananmen Square. A man stands in front of a tank to stop it from proceeding further. Whichever the way the tank moves, he follows, forming a human shield on his own. What motivates him to do this, to risk his freedom and possibly his life in order to protest?

That is the question asked by American photographer Joe Schofield (Stephen Campbell Moore), who captures this moment on film and hides the negatives in the toilet when police come searching.

To his excitement many years later when he is safely in the US, a rumour emerges that the tank man actually immigrated to the US. He risks everything – his job, his time and even the prospect of a relationship to try and track him down.

Meanwhile in China, Zhang Lin (Benedict Wong) is a survivor of the massacre, but haunted by the memory of his wife who died in front of those guns. Ably assisted by an outstanding expressionistic set that seems to reflect the state of his mind as much as his surroundings Wong ties the heart into knots with his performance.

The play has garnered five star reviews from some of the severest critics in the London scene. However, there is one flaw that takes away a lot of the play’s appeal. It is the suspicion that writer Lucy Kirkwood is every bit as guilty as her photographer anti-hero of using a genuine tragedy for her own ends.

Of course, it is the job of every writer to tell a good story. But clever plot twists, especially at the end of the play, cheapen the tragedy and reduce the grandeur of the subject and bring it down to the level of a clever crime thriller.

Perhaps Kirkwood sees the irony, and even plays up to it. But by reducing the complexities of a real life situation to an old fashioned plot-twister, the play falls short of the truly sublime that was well within its reach.
Posted by Sruti Magazine at Monday, September 16, 2013