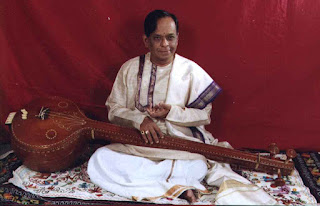 Veteran Carnatic musician Mangalampalli Balamuralikrishna died on Tuesday 22 November in Chennai. He was 86. An incomparable musician with a silken voice and a charismatic personality, Balamuralikrishna was a versatile artist with a long, noteworthy and enviable career. He was a master of many musical instruments, a prolific composer with tremendous creativity, an affectionate guru, a non-conformist, a playback singer, a multifaceted personality who reached the acme of fame by swimming against the current. He was a prodigy, who became a genius.

He was A Top graded artist in All India Radio which he also served as Music Producer. He was well respected by Hindustani music maestros with whom he performed jugalbandis. He was decorated with several prestigious awards like the Padma Vibhushan, the Central Sangeet Natak Akademi Fellowship & Award, the Sangita Kalanidhi, Nadabrahmam,   the Kalidas Samman, Isai Peraringnar and Chevaliers des Lettres, to name a few.

His passing away is a great loss to the music world.

(See Sruti 325 for cover story on the maestro)
Posted by Sruti Magazine at Tuesday, November 22, 2016