Prof S. Rajeswari, retired Principal of the Tamil Nadu Government Music College, was honoured by Sahana Fine Arts in Mogappair.  The title of Isai Chudaroli was conferred on the Carnatic musician by the chief guests Natya Kalanidhis Shanta and V.P. Dhananjayan on 7 January 2018. The Dhananjayans paid rich tribute to the awardee and described her as an all-rounder--a concert singer, excellent teacher, musicologist, and composer who has the special qualification of singing with aplomb and conducting a Bharatanatyam performance. They also recalled how connoisseurs would throng to watch Kamala--the doyen of Bharatanatyam-- and listen to S. Rajeswari 's excellent vocal accompaniment.

A good crowd attended the event and the Carnatic vocal concert of vidushi S. Rajeswari who was accompanied on the violin by Usha Rajgopalan and on the Mridangam by Tanjavur Subramaniam. This is the ninth year that Sahana Fine Arts is conducting a music and dance festival,  and next year being the tenth, the convenor Arun Karthik (a violinist) announced that a ten-day art festival would be held to mark the occasion, which was welcomed with applause by the audience. 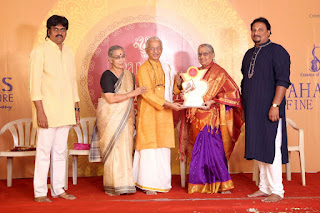 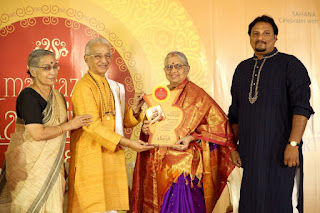