TAKING CLASSICAL ARTS TO ITS ROOTS

At a time when anything and everything can get commercialised, it is a pleasant surprise to find a ninth-generation artist who teaches classical arts on a fee-free basis to more than 200 children in Chennai. “Art is unbiased,” says Aniruddha Knight, the only grandson of T. Balasaraswati and the director of Balasaraswati Institute of Performing Arts. 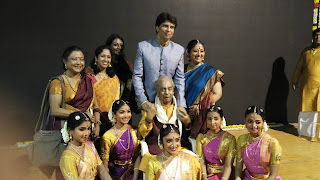 Tanjore Balasaraswati, Padma Vibushan awardee, and celebrated Bharatanatyam exponent of  the 20th century, belongs to the grand musical lineage of Veena Dhanammal. She, along with nattuvanar Ganesa Pillai, trained students at the Balasaraswati School of Bharatanatyam  established by the Madras Music Academy in 1953, which ran successfully for many years. After Balasaraswati visited the U.S.A. in the 1960s the Balasaraswati School of Music and Dance was established in the U.S.A. and was run by Luise Scripps in the mid-1970s. Bala's tradition spread throughout much of North America by the 1980s with branches in Los Angeles, San Francisco and New York City. Today the school runs under the name of Balasaraswati Institute of Performing Arts in Kilpauk, Chennai, after being passed on to three generations.

“But times have changed and many people began to take this art for granted through elitism and affluence. This art began to move away from its traditional roots in classicism,” says Aniruddha, who learnt the art from his grandmother and his mother Lakshmi Knight. Aniruddha is the only male descendant of  a 200-year old family of dancers and musicians. He has been performing since he was seven years old. He began to teach in 2014 with the aim to preserve and pass on his worthy legacy, “Today the school runs on a fee-free structure where students only pay through long-term commitment and persistence in learning.”

“Many people told me that this would not work—that people would not value something without a monetary transaction,” Aniruddha says. “It had to be proved that an art such as this could be taught and learnt without any pressure of money for the teacher and entitlement of the parents because they have paid for something.” This also ensures that people from different walks of life such as cooks, farmers, labourers have access to the arts. Traditionally, such people have not had an opportunity to be exposed to the arts.

Aniruddha is ably assisted by six of his teaching-assistants, the students are divided into several batches and are provided intense training.

Today, over 200 students learn music, dance, flute and mridangam on a regular basis with many of them travelling long distances from outside of Chennai to Kilpauk. Fourteen-year-old Swetha Nellaiappan says, “We get up at three in the morning to arrive for a 7.30 am class. We come from a village called Kalakattur 10 kms from Kancheepuram. To get to class we take a bus to Kancheepuram, a train to Chennai, and another city bus. This difficult journey is well-worth my time and I love dancing.” Over 20 students come from this village.

From each area where these students come from, chaperones ensure the children’s safety and discipline. In this way, it involves many people from the community who want a better life for the children for whom this is an unique opportunity. The students are also given milk and breakfast after every class. “It is so beautiful to see Balamma’s legacy being carried on to the next generation and I am happy to be a part of it,” says Munnuswamy, a chaperon from Perambur. 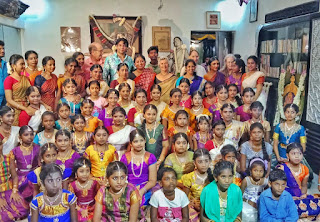 The Institute organises the Balasaraswati Award function on 13 May every year to mark Balasaraswati’s birthday. The Balasarawati-Scripps Award for Artistic Excellence is conferred on stalwarts in the field of classical dance—veteran dancer-gurus Adyar Lakshman, Birju Maharaj and Sonal Mansingh are the recipients of the award till date. Students of the Balasaraswati Institute of Performing Arts are provided an opportunity to perform on the occasion, which offers them the rare experience of dancing in the presence of such great artists, other exponents and critics.

“The fee-free model has been a success far beyond our expectations,” says Aniruddha, “The camaraderie and sincerity is unique and I feel it can only be so strong without the expectation of money. It compels the teacher-student and the community to value their own culture and understand  the  hundreds of years of cultural evolution found nowhere else in the world.”
Posted by Sruti Magazine at Saturday, June 15, 2019