Hemamalini Arni – To the manner born 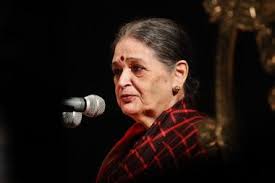 There are some people whom you meet just once and they leave an everlasting impression on you. Hemamalini Arni was one such – an unforgettable personality.

The year was 2017 and I suddenly found myself catapulted to Convenor of the Music Academy’s annual conference. That was Sangita Kalanidhi T.  Balasaraswathi’s centenary year, and my predecessor, before he demitted office, had fixed three programmes to commemorate her during the annual conference. The first had B. Balasubrahmaniyan of Wesleyan presenting on Bala’s music. The second was Aniruddha Knight presenting on her dance. The third, titled Remembering Bala, was by Hemamalini Arni.

“What was the need for three programmes on Bala?” grumbled some of those who always find something to grumble about in the Academy’s functioning. “And who is this lady anyway?” I must say I too did not have any idea beyond what my predecessor had told me – that she was one of Bala’s senior disciples and  a respected guru in Hyderabad. As the conference approached, I was quite apprehensive, as I did not know what to expect. And then, just a couple of weeks before the programme, I got an email from Hemamalini Arni, giving in impeccable English all her requirements – a stage for her accompanists who were to be seated to her right, a chair without arms for her, a stand mic, and space for her student Kiranmayee to dance. I replied that all would be in readiness and also suggested that she come a day in advance and see the stage for herself. She agreed.

Promptly at the agreed time on the day before her programme, a large car swept up the 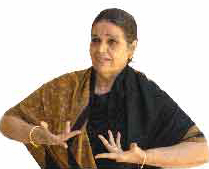 Academy drive. In the rear was Hemamalini – a lady of impressive personality and a dignified demeanour, wearing a lovely burgundy silk saree. By her side was her husband with a walking stick and wearing a golf cap (or was it a deerstalker?). They belonged to a different day and age. I would learn later that he was a scion of the Arni Jagirdar family and maintained a website that in a humorous and self-deprecating way, had all family history in it. Hemamalini had a way of addressing me as Appa, which I found most endearing. We went to the mini hall, she expressed satisfaction at the arrangements and returned to the car. Just before she shut the door she turned around and said, “Appa, I need a favour. Sanjay Subrahmanyan is singing tonight here.”

I knew what was coming. And so I opened my mouth to give her the usual spiel about how the Academy never sells tickets for the big boss’ concerts and so it would be quite imp…

“No Appa,” she said firmly shutting me up even before I started. “Don’t tell me all that about how impossible it is all. I am in my mid 80s and my husband is in his 90s. We don’t want an upstairs ticket or something at the rear of the ground floor. I want something in front and I want to remember this concert. Forget my lecdem tomorrow. So please get it done. After all if you cannot who can? That is why you are Secretary are you not?” and with a deep chuckle she had withdrawn into the car and was gone.

I had of course fallen deeply in love with the lady, who so reminded me of my imperious grandmother. And so I moved heaven and earth and got her the tickets she wanted. The old couple was delighted and later declared that Sanjay had been superlative.

That night I read all I could find about her. She was the daughter of C.K.  Vijayaraghavan ICS and was therefore sister to Padmini Diwakar, a lady whom I knew and who was a disciple of Maharajapuram Viswanatha Iyer. The family home was a palatial one in R.A. Puram (since demolished) where her brother lived in seclusion, caring for several stray dogs. Hemamalini had danced for a film (Kannika 1947), the number being Natanam Adinar. A disciple of Vazhuvoor Ramiah Pillai, she later learnt from Bala and, after marriage, settled in Hyderabad where she ran her dance school. The dream girl of Hindi cinema was apparently named after her.

The morning of her lecdem saw Hemamalini Arni arrive in a black saree with gold border. She took her chair on stage and then held us spellbound for the next hour or so. She told us that she had danced for the Academy and the next day Bala had arrived at home with a cup as a gift and had begun teaching her music and dance. In Kutrala Kuravanji, Bala cast her as the princess while she played the Kurathi. (I later located a picture of this in a Tamil Isai Sangam souvenir and sent Hemamalini a copy). That morning, everyone in the Academy had tears flowing down their faces as Hemamalini took charge and sang, all the while doing abhinaya. Nobody noticed that it was an elderly lady seated on a chair. She brought several Bala favourites to life – Tiruvottriyur Tyagarajan, Athuvum solluval, Neela mayil vahanano, Teruvil varano (this was easily the highlight), Mogadochi and of course Krishna nee begane. Kiranmayee did the dancing. Every once in a while Hemamalini would break into an anecdote about Bala. Some were humorous, many moving in the extreme.

A day previous to the lecdem, Hemamalini had said she would like it to be recorded and offered to pay for the same. I made arrangements, and as the presentation progressed realised what a treasure was being unveiled in our midst. I sent a note to the Academy office that we would bear the cost and give her a copy. In fact this led to all lecdems thereafter being video recorded and archived.

As she ended, we were at a loss for words. And then slowly the applause built up. People were on their feet clapping. Many rushed to the stage to take selfies. That afternoon, the experts committee declared that this was the best lecdem and none other than this could qualify for the prize. I saw Hemamalini and her husband Chandru off with many promises to visit them in Hyderabad but that was never to be. A week later I called her to inform her that she had won the lecdem prize. She laughed heartily, “What are you saying Appa? At my age!” Her sister Padmini represented her at the sadas.

The magic of that lecdem still lingers even though the presenter has left us.

Email ThisBlogThis!Share to TwitterShare to FacebookShare to Pinterest
Labels: By Sriram V