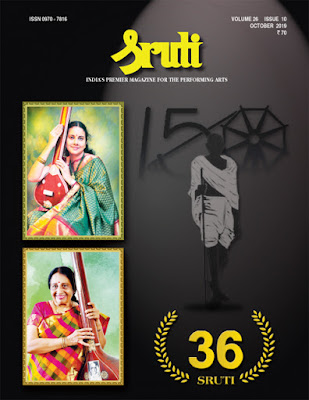 October is the “birthday month” of your favourite magazine on the performing arts. Sruti was launched 36 years ago on 16 October 1983 as a “new kind of magazine” in India insofar as classical music and dance were concerned. It was the culmination of the vision and passion of N. Pattabhi Raman, founder and first Editor-in-Chief of Sruti. The magazine turned out to be a birthday gift for him as he was born on 24 October. The content of the magazine was put together with intelligent care to offer enjoyable reading, and enlightenment too, primarily to those who like classical music and dance, and those who in a sense were waiting to be drawn into the charmed circle. Sruti has certainly carved a niche for itself, and over the years, it has become a symbol of legacy and lineage in its archiving, reporting and coverage across the classical arts. We strive to constantly uphold the tradition and remain relevant to the current times.

In this issue, we offer stories of two artists born in September-October. Veteran musician and composer Rukmini Ramani turned 80 in the first week of September. Her family celebrated her satabhishekam and her disciples organised events to felicitate her on the happy occasion. Daughter of the famous composer Sangita Kalanidhi Brahmasri Papanasam Sivan, she is popularising his and her own compositions with zeal.

The birthday of senior Carnatic vocalist Gayathri Girish too falls in October. She has earned a unique place for herself as a research-oriented, serious musician, passionate about our rich cultural and spiritual heritage—these form the substance of her much sought after thematic concerts.

And as the whole world celebrates the birthday of Mahatma Gandhi on 2 October, we wondered what the Mahatma’s views could have been about the performing arts! Gandhiji was of the opinion that music is a constructive activity and a means of popular awakening. He looked upon it as a means of spiritual development. Gandhian scholar and arts writer V.R. Devika has put together an interesting article about music and the Mahatma for our readers. It is our small way of paying tribute to the Father of our Nation.

In a country which has taken up the Swacch Bharat mission to clean up the environment and inculcate good habits, should we not seriously take up the work of cleansing the performing arts scene of some of the ugly practises gnawing at its roots? October happens to be the month when the #MeToo movement came out into the open about two years ago. It soon gained momentum and exploded on social media with a lot of naming and shaming. Some responsible organisations paid heed to it and many heads rolled soon after. But there has been only selective action, only a few have paid the price and some of them seem to be quietly coming back into the performance circuit, while several others remain scot free. As many important organisations have constituted their Internal Complaints Committee (ICC), the victims of MeToo must come bold to formally file complaints to take things to the needed conclusion. Otherwise all the earlier hue and cry will be to no avail ! Should not artists and organisations take cognisance and act against persons with a known MeToo record?
S. JANAKI
Posted by Sruti Magazine at Monday, September 30, 2019

Email ThisBlogThis!Share to TwitterShare to FacebookShare to Pinterest
Labels: FROM THE EDITOR