Thirty seven years have rolled by since Sruti magazine came into being on 16 September 1983, 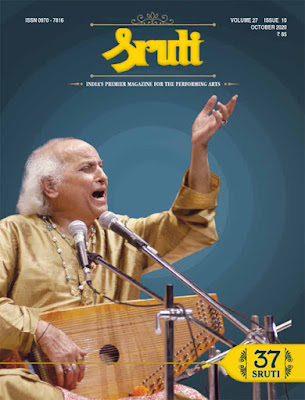 through the efforts of its founder and first Editor-in-Chief N. Pattabhi Raman. This being our October “anniversary issue”, the spotlight is on Sruti ! We approached a few personalities—musicians, dancers and writers—long-time subscribers who have been well-wishers of Sruti and have been watching it since its inception—to recall their association with the magazine. We express our thanks to Sangita Kalanidhi T.V. Gopalakrishnan, Natyacharya V.P. Dhananjayan (it is interesting that both compare it to the adhara sruti for music), Prof. Sudharani Raghupathy, vidushi Geetha Raja and rasika-writer S. Sivaramakrishnan, for agreeing to do so with alacrity. Sruti has always tried to uphold objectivity and responsible journalism. We believe in tradition and meaningful innovation, and have been in step with the times—the print magazine is our mainstay, but we do have its digital version through our Sruti website, our App, and have established our regular presence on social media via Facebook, Instagram and YouTube (showcasing recordings from our archives). We invite our readers to ‘Like’ and freely ‘Subscribe’ to these to stay updated on our latest posts. It may seem like patting ourselves, but at this juncture it would be apt to also place on record our thanks to the dedicated small Sruti team which has risen to the occasion in a difficult scenario in the wake of “work-from-home”, juggling time schedules to meet physical distancing norms and the financial constraints, to successfully bring out the magazine without a break in the months following the Covid 19 pandemic and the resultant lockdown.

The cover story this time is a tribute to Sangeet Martand Pandit Jasraj—the sun in the firmament of Hindustani vocal music— who has moved into the eternal orbit of Nadabrahman. Two articles throw light on his life, his music as a romanticist crusader, along with an interview with disciple Kala Ramnath which gives a glimpse into the personality of the prolific teacher.

Not many of this generation may know about J.S. Prabhu whose twin passions were Hindustani music and the SGS Sabha. From the 1950s to the 1980s, he played a major role in patronizing Hindustani music in Chennai, and also in the growth and progress of the Samyukta Gowda Saraswata Sabha.

The News and Notes section includes online initiatives organized by Sukrtam Foundation, Upasana Arts and Ananda Shankar Jayant—each one of them commendable for the “take away” quotient for viewers. A comparative analysis of rasa in the Sanskrit and Tamil traditions—as mentioned in the Natya Sastra, Tolkappiam and Koothanool, by dancer-scholar Lakshmi Ramaswamy, should provide our readers some food-for-thought. There is an interesting behind-the-scenes account by Seetha Ratnakar on the genesis and the making of Viralimalai Kuravanji—the runaway hit, produced and televised by Doordarshan Kendra, Chennai. The second part of the article on Siva temples on the Akhanda Cauvery takes you to the heritage sthalam called Iyermalai—Ratnagiri. S. Rajam’s interpretation of the ‘Gandhara’ takes the saptaswara devata series forward.

The passing away of the nonagenarian erudite scholar Kapila Vatsyayan on 17 September in New Delhi, is an irreparable loss to the field of scholarship in Indian art and culture. She was among the rare personalities who could effectively connect theoretical knowledge to practice. She was an able arts administrator and institution builder involved in several premier cultural organisations in India. Her vision, her holistic approach to Indian art and culture, and her pathbreaking books helped place Indian art, culture and scholarship on the international map. In this new age of ‘cut and paste’ research it is very hard to come across scholars of this stature.

As the issue goes to print, we are hit again by the shocking news of the passing away of the legendary popular musician S.P. Balasubrahmanyam in Chennai, and the nonagenarian Bharatanatyam guru and composer Rajee Narayan in Mumbai.