The musical genius of the Tanjavur Quartet 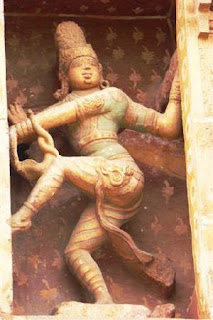 Ten centuries ago, South Indian music and dance had reached high levels of sophistication in Tanjavur, where royal patronage of three dynasties (Chola, Nayaka, Maratha) and the connoisseurship of the people, had nurtured the arts with love and discernment.
Among the galaxy of poets, musicians and composers of that green belt, the Tanjavur Quartet of the brothers Chinnayya, Ponniah, Sivanandam and Vadivelu (early 19th century) stand out for their attainments in both dance and music. They are credited with having systematized the “margam” of what we know as Bharatanatyam today.
Apart from the continuation of their tradition through natyacharyas in their own family, like the late Kittappa Pillai and Subbaraya Pillai, their unmistakable stamp is left on the entire genre through the two major (and contrastive) influences of Balasaraswati and Rukmini Devi. Their gurus Kandappa Pillai and Minakshisundaram Pillai carried the legacy of the Tanjavur Quartet.
Born in a family of oduvars, the brothers inherited a sense of laya and raga, along with the spiritual heritage of a ritualistic art. This was strengthened when they became disciples of Muthuswami Dikshitar. With patronage from the Maratha rulers (Serfoji II and Sivaji II), the Mysore court, and Swati Tirunal in Travancore, they established themselves not only as vidwans and nattuvanars, but also as composers of merit, mostly paying homage to Brihadisvara, the reigning deity of Tanjapuri, and to their royal patrons. Some of the songs express their devotion to their guru, and their pride in him.
Their collective works span a variety of compositions for both music and dance - tana pada varnam, kriti, padam, javali, swarajati, daru, kavuttuvam, sooladi and tillana. Sivanandam excelled as a veena player and was an expert in abhinaya; while Vadivelu popularised the western violin in Carnatic music, and contributed to the growth of Mohiniyattam in Kerala.
It is evident that the brothers viewed classical dance and music as allied art forms. This imparts a special glow to their compositions in both the rhythm and bhava aspects. The ragas are treated with imagination, depth and respect for tradition. The compositions offer tremendous scope for emotional interpretation, not only for the dancer, but for the musician as well.
Carnatic musicians have not drawn as much from the heritage of the Tanjavur Quartet as dancers have done, despite the fact that their compositions are steeped in ragabhava, reflecting many moods. There is variety here, for both expansive treatment and for lighter expressions.
(Based on a presentation at the Natya Kala Conference (2000) of Sri Krishna Gana Sabha).
Posted by Sruti Magazine at Thursday, February 09, 2012