By Raja Ramanathan
London, England, is one of the best cities in the world, to both put on weight and work it off. For the past week, I’ve been spending the evenings loading up on calories at different restaurants, and shedding them during the day, walking several kilometres, exploring the city. 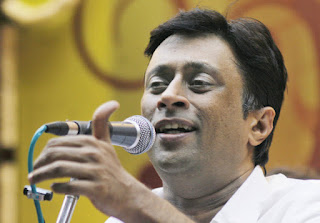 The original plan for last Friday was to put on calories of the Italian/ French variety, pasta and béchamel sauce... and that was the plan, until my daughter and niece excitedly told me about the Sanjay Subbu (btw, Sanjay Subrahmanyan, that’s what your fan club here calls you) and Amjad Ali Khan chamber concert at Wigmore Hall. Whether I was going or not, the local fan club of Sanjay, consisting of daughter and niece and others, had cancelled the calorie acquisition activity and had booked me to join them at Wigmore Hall, a decision I totally supported.
The chamber concerts at Wigmore Hall are being presented by Amjad Ali Khan, and, present, for the most part, two different forms of Indian music or dance, with the theme that all art is essentially from the same universal source. Yesterday’s chamber concert was a totally new experience for me.
To begin with, the format. One hour of each of the maestros, not the usual three hours. We were debating what Sanjay would do in the one hour. His local fan club was convinced that whatever the amount of the time, he would be awesome—and awesome, he was. Three short and snappy pieces that left the audience in awe and asking for more. I was particularly impressed with the way he fitted in a brief RTP. The accompanists, Neyveli Venkatesh (mridangam) and S Varadarajan (violin) provided wonderful support. 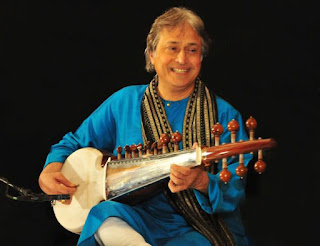 Amjad Ali Khan took over for the second half of the chamber concert, and proved once again, that he is among the best Indian music has given to the world. His rendering of Darbari Kanada was classic. Fateh Singh Gangani provided great support on the pakhawaj and tabla. I did not know till Ustad Amjad Khan Ali Khan told the audience that every time the pakhawaj is played a fresh coat of wheat flour dough is applied to the skin of the drum.
The idea of these one-hour chamber concerts, combined with the discipline of the audiences here fascinates me. The audience, predominantly white, seemed to know what they were listening to, and, there were no exits to the canteen when the accompanists were playing. The programme sheet even requests the audience to stifle a cough, as much as possible, so as not to disturb the listening experience for others.
A great evening, and, what’s more, we had time at the end to go down to Covent Garden and indulge in European cuisine. It is great to see the vegetarian options available these days. I need to walk a few kilometres now to shake off that béchamel sauce, now.
Posted by Sruti Magazine at Tuesday, March 13, 2012