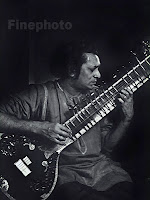 Some of the finest melodies in the genre of Hindi film songs were composed by Ravi Shankar, a fact unlikely to be known to most Hindustani music lovers or film music enthusiasts of a recent vintage. In understanding the demands of the scene in which a song appears, there could have been few equals to Ravi Shankar among even the greatest of Hindi film music directors, judging by his peerless creations in movies like Anuradha (1960), directed by Hrishikesh Mukherjee and starring Balraj Sahni and Leela Naidu, and Godaan (1963, based on a novel of the same name by Munshi Premchand). Anjaan and Shailendra were the lyricists for these films, and Shailendra was Ravi Shankar’s favourite.
‘Haye re voh din kyun na aye!’ (http://www.youtube.com/watch?v=qhCXMb1NgOs), a song by Lata Mangeshkar from Anuradha was unforgettable. It was a beautiful melody based on raga Janasammodini sung by a mature Lata whose voice was not only still young and fresh enough to capture its every nuance, but also had that quality that tugged at your heartstrings.
The scene itself was memorable. When the film starts, Anuradha is a famous playback singer who has all of India in thrall with her wonderful voice and is riding the crest of a wave when she marries a doctor, played by Balraj Sahni who decides to work in a village. In a rather naïve depiction of a medical practitioner—who is also a research scientist—Mukherjee tells a touching tale of a loving couple, gradually heading towards estrangement, thanks to the doctor’s obsessive involvement with his work, which will save millions of lives, no less. The singer is forced to become a rural housewife, cut off from her music and her former life.
In a melodramatic but powerful denouement, an elder family member coaxes Anuradha to dust her veena, tune it after years of neglect, and sing again for him—just when she is beginning to consider leaving her doctor husband for an old friend, whom serendipity brings to her doorstep as an accident victim, and whom of course her husband saves. All’s well that ends well, and the good doctor realises in the nick of time that he is about to lose his precious jewel, and Anuradha too gets over her momentary weakness.
Though there are many lovely songs in the film, based on folk and classical music (Saavre saavre (http://www.youtube.com/watch?v=wqpKA67IbMQ), Jaane kaise sapnon me kho gayeen akhiyan (http://www.youtube.com/watch?v=WteixWvAeFk), and Hai, kaise din beete kaise beeti ratiya (http://www.youtube.com/watch?v=KRSYVRKlbzo), the last of which opens with an almost physical ache as Anuradha relives a happy but irretrievable past through the song which sarangi, violin, sitar and flute together completely immerse in tragedy) and the scenes are beautifully enacted by Balraj Sahni of the noble good looks, and the frail, delicate beauty, Leela Naidu, the final song was the most poignant, most emotive of the lot, especially when the line ‘Sooni meri beena, sangeet bina’ is sung. My wife and I saw the film in a morning show at Hyderabad in the early 1970s, and the audience burst into spontaneous applause after the song.
Mukesh’s Hiya jarat rahat din rain, o Rama from Godaan (http://www.youtube.com/watch?v=vE6-PqX6jhA), is a hauntingly simple peasant tune, which starts on a happy enough note, with the protagonist (Raj Kumar) drinking in the beauty of nature, of birdcall and blossoming life in the fields, but takes a poignant turn with a hint of drought; darat dil bechain, (the restless heart is afraid) is the concluding refrain of the song.
In contrast, Hori khelat Nandlal, Biraj mein (http://www.youtube.com/watch?v=x1bCMRxr-ZU), of the same film by Mohammed Rafi is an effervescent Holi song, capturing the rustic expression of joy in a chorus of celebration. The instruments used in the song are typically folksy. Shades of Rabindra Sangeet seem to influence Chali aaj gori piya ki nagariya (http://www.youtube.com/watch?v=bpZLtibJPBU), the shehnai-dominated song of separation in the voice of Lata Mangeshkar as a young bride leaves home for the unknown world of her husband. Ravi Shankar achieves heart-breaking pathos with the simplicity of this tune, the pace of the song and perfect instrumentation.
Though Ravi Shankar composed music for at least another major film, Gulzar’s Meera, with Vani Jairam singing the memorable songs of the Rajasthani princess-poet-saint, and also the score for Richard Attenborough’s Gandhi, to me, the music of his 1960s foray into film music, the songs of Anuradha in particular, were evidence of a rare mastery of the medium.
Posted by Sruti Magazine at Monday, April 02, 2012