Of tonal tapestries and musical mosaics 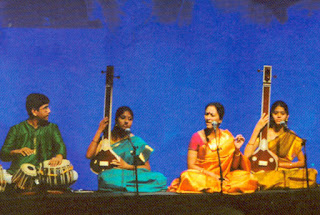 Uyir, nee kankanda deivam (Life, you are divinity personified) goes the chorus of a popular Subramania Bharati song. Lights brightened the artistically designed stage, and rhythmic beats followed by a chorus of voices set the tone for an evening of transcending music at Aikya 2012, at the Music Academy on 26 February.
Aikya 2012, described as a ‘kaleidoscopic concert’, had a legacy to live up to as the two previous versions organized by Global Adjustments Services and Interface were popular successes. The concerts, in support of Smrutha Dhwani, an NGO, have been an initiative for honouring retiring artists in the field of performing arts. They have been marked by themes such as diversity and duality that aim to create a nexus between music and everyday life, according to Anita Krishnaswamy, President of Global Adjustments. Having featured accomplished singers such as Aruna Sairam, Sudha Raghnathan and TM Krishna in previous years, Aikya 2012 starred Bombay Jayashri.
The concert, with its central theme described as an exploration of relationships as metaphorical strings and circumscribing boundaries, was a musical pastiche. It unfolded in a seemingly arbitrary manner to feature a variety of tunes, of broadly varying genres and periods.
There was something on offer for everyone. As a rasika of music, you could sample the Sanskrit composition ‘Sri Valli’ in ragam Natabhairavi, the Hindi song, ‘hanak jhanak payal baje and the abhang, Bhakta jana vatsale. Carnatic music fans savoured the familiar notes of Tyagaraja’s Mokshamu galada in Saramati, rendered in Jayashri’s mellifluous voice, while the ghazal Ranjish hi sahi and a Tansen melody in Gurjari Todi were pleasant offerings from the music genres of the north.
A number of listeners would have been taken by surprise when the orchestra broke out into the strains of popular film songs like Aap ki nazaron ne samjha. Instrumental renderings of various Ilayaraja melodies were met with enthusiastic applause. Movie songs are those familiar tunes that remind us of many things, Jayashri said, in one of her many brief commentaries that interspersed the singing.
The final tillana in the ragam Sindhubhairavi rose to a crescendo and provided the perfect climax to the evening.
The concert, according to the organizers, commemorated 150 years of the Indian national anthem and was dedicated to the Bengali poet laureate, Rabindranath Tagore. A sample of Rabindra Sangeet would have thus been a perfect acknowledgment of the poet’s contribution to our musical and literary heritage.
The orchestra was an excellent complement to the vocals of Jayashri and seven of her students. In combination and perfect tandem, the strings, percussion and keys provided a soulful background to the traditional music and wove a tapestry of non-conventional tunes, including some from South East Asia. Embar Kannan with one of his spellbinding performances on the violin and Navin Iyer on the flute were exceptional. The soul-stirring lyrics of the Bharatiyar composition, Maalaipozhudhil were enhanced by the ambience of twilight created by Navneeth Sundar on the keys. Sai Sravanam on the tabla and J. Vaidhyanathan on the mridangam ably augmented the depth of the instrumental talent of the evening.
Speaking about being part of Aikya 2012, Embar Kannan said, “It was a really out-of-this-world experience,. a musical journey for all of us in different genres. We all went through the journey together. It wasn’t about an individual. It’s the greatness of our music.”
Though at many points Jayashri’s voice seemed to be eclipsed, her vocal range, perfect enunciation and unique tonality did indeed mesh to provide the musical treat that was Aikya 2012. Speaking about the choice of the versatile artiste for this edition of Aikya, Anita Krishnaswamy said, “No one else can sing an entire range from classical to the lightest form, spanning all genres of music. And the theme just lends itself. She understands music in every little way and blends everything seamlessly, taking the audience with her.”
Aikya 2012, though near perfect in many aspects, did not carry over the conceptual and artistic grandeur of the previous editions. The stage lighting, which has always been a noticeable feature of the framework of design, seemed to be mismanaged in places. The acoustics of the Academy too, did not prove satisfactory on the occasion.
The author is a postgraduate student of Asian College of Journalism.
Posted by Sruti Magazine at Monday, April 30, 2012