The process behind the MS magic 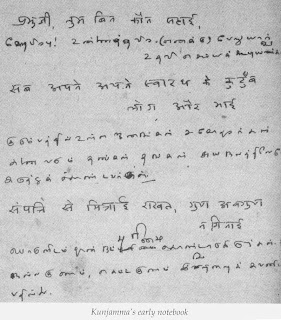 MS Subbulakshmi’s music notebooks testified to her all round concern for every aspect of rachita or composed music, a vital part of Carnatic music dear to musicians as the outpourings of saintly souls in Telugu, Kannada, Sanskrit, Tamil and Malayalam. MS sang in north Indian languages too, mainly Hindi, Marathi and Gujarati. One of her albums contains songs in ten languages! Once-in-a-while attempts include the English hymn by Rajaji that she sang with Radha at the United Nations as a goodwill gesture, and an amalgamation of apt lyrics in Sanskrit, Arabic, Japanese and Tamil (even English) at the Afro-Asian Congress of Ophthalmology in 1976.
Every one of these songs, by composers old and new, was first inscribed with its meaning in her notebook, and then each phrase notated with its literal and metaphoric meanings. Music notation came next.
The initial learning process included checking diction, emphasis, and the right spot where a phrase could be split in melodising. Experts were consulted to ensure accuracy.
MS had studied Tamil, Sanskrit, Hindi and Telugu, but did not consider herself a scholar. Yet, her Sanskrit diction amazed the pundits. The proud purohits of Kasi granted that she had flawless diction. Veteran Agnihotram Thathachariar in Tamil Nadu admitted that what had taken him a lifetime to perfect came to her in a flash of intuition. Her vak suddham (lucid enunciation) matched her sruti suddham (fidelity to pitch).
Instinct might have played its part, but the effort expended on such mastery was considerable. When MS decided to record the Vishnu Sahasranamam, pundits chanted the verses in her home for a 40-day cycle. When she recorded Kamban’s Ramayana verses, Tamil scholar Justice MM Ismail was consulted before she embarked on the project, as also before the actual recording. Notably, none of these recordings saw her hold the written text in her hand. Learning by heart was vital to truly knowing the words and melody, to flawless delivery in performance.
She was always generous towards young musicians, but the one practice MS invariably condemned was looking at the written lyric while singing. It was an insult to the composer. “How can you experience the feelings in the verse, if you are unsure of the words?” Performance was not the end of music. It was merely the outward manifestation of a long process of internalisation whereby melody and meaning became part of the singer’s psyche. Her devotion was given as much to the training process as to the godhead within. MS was convinced that music was a means of transcendence. 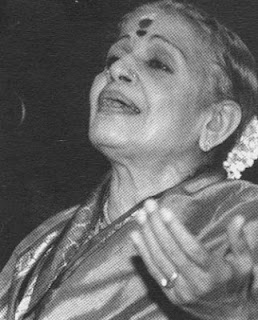 A related attribute was swarasthana suddham, or accurate pitching of every note in its rightful slot. No fudging, no blurring. Guru Semmangudi taught her the mega composition of the 72 melakarta ragas, where the identity of each successive raga has to be established by minor shifts in the notes. He had her record them for posterity. “Who else can render them so faultlessly?” he asked. When her spiritual guru Paramacharya heard it, he declared that this achievement would stand as long as the sun and the moon shone in the sky.
There was something intoxicating about Kunjamma’s voice. It made people say, “She sings the way she does out of sheer instinct.” Even informed listeners fell into the trap of denying her self reflexivity. The question is, can a sophisticated art form be practised at the highest level, over six decades, without razor sharp intelligence? Especially as our ears can trace through these years the evolution of an individual style, as elegant as it was emotional? MS acquired her vast repertoire from several sources, but when she sang Rama rama guna seema or Jagadoddliarana, how did they become her own, though true to the pathantara of the vidwans from whom she learnt them—Musiri and KVN?
Her editing skills were amazing. Every sangati and karvai had a proportionate length. If the vocal accompanist exceeded it, she would say, “Cut! cut! Jeevane poyidum” (the life force will go). She could demonstrate different kinds of volume control and modulations—the expected and the unexpected. She could hook her swaras to myriad anuswaras for silken nuancing, and very different sound effects while singing the same sangati twice. Even in her heyday of blitzkrieg brigas there was evidence of this phenomenal control. Her expression was gamaka-rooted. But there was no overkill. “Atiye koodadu,” (there should be no excess) was her inexorable principle. Kunjamma thought her music through and shaped her own original aesthetics. Like the ancient Indian aestheticians she believed that auchitya or appropriateness was essential for art that was allusive, art that strove for the sublime.
Excerpted from MS & Radha: Saga of Steadfast Devotion
Posted by Sruti Magazine at Thursday, April 26, 2012