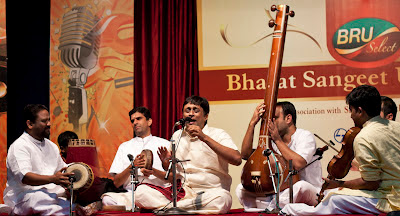 At the core of Carnatic music is a vast repertoire of songs, mostly in praise of the gods and goddesses of the Hindu pantheon, vocally rendered, though supported on the concert platform by the western violin—now completely assimilated as an Indian instrument—and percussion.
The major components of a Carnatic music concert or kutcheri are songs known as kritis or kirtanas, but also featured are other types of compositions known as varnams, swarajatis, tillanas, viruttams and so on.
Solo instrumental concerts too consist of the rendering of these songs without the lyrics being sung. The violin, veena and chitraveena are the commonest string instruments, while the flute and the nagaswaram—the south Indian pipe—are the usual wind instruments. The violin is now more or less accepted as an Indian instrument, but other western instruments in vogue in Carnatic music include the clarionet, saxophone, guitar and mandolin.
The typical concert ensemble comprises a vocalist or instrumentalist in a leading role, usually supported by a violin and rhythmic or percussion accompaniment in the form of the mridangam, alone or in tandem with the ghatam and/ or khanjira.
Originating as temple music and nurtured by royal patronage, today Carnatic music is performed on the secular stage. The typical Carnatic music concert is of approximately two and a half hours’ duration.
A vocal concert—the most common performance—has a singer, male or female, or sometimes a duo of singers, accompanied by a violinist seated to his or her left and one or more percussionists to his or her right.
The most common percussion instrument is a cylindrical drum called the mridangam placed horizontally in front of the drummer.
The ghatam--a mud pot—and a kanjira—a circular hand held tambourine-like instrument—complete the ensemble.
There can be more or fewer instruments on stage, but the mridangam is mandatory, so that the standard minimum team is voice-violin-mridangam.
While the western violin has been successfully adapted by Carnatic music, other instruments in vogue, like the nagaswaram, a long wooden pipe, the veena, a fretted string instrument, and the bamboo flute, are Indian.
They are played as lead, not accompanying, instruments, though instrumental music has been steadily slipping in popularity.
Western instruments like the guitar, mandolin, clarionet and saxophone are also featured in concerts, though not with the same level of acceptance as the violin.
All the musicians sit cross-legged on a mat on the floor of the stage.
A concert comprises both composed and improvised music, with every musician on stage getting to showcase his or her creativity at appropriate times.
A typical present-day concert begins with a varnam, a short composition with both lyrics and matching solfa notes sung at varying speeds.
Follow a few compositions known as kritis or kirtanas, mostly songs of devotional or spiritual content in the ancient pan-Indian language Sanskrit or one of the south Indian languages, predominantly Telugu.
Every one of these songs is likely to contain improvisational elements, including wordless elaboration of the raga, variations on a single line of lyric or repeated combinations of the solfa syllables.
All these creative components are rendered in greater measure in the main composition of the concert, which may last approximately an hour, and offers an opportunity to the percussionists to display their creativity unaccompanied by voice or violin.
The main song is often followed by what purists regard as the piece-de-resistance of Carnatic music—the ragam-tanam-pallavi—, which is entirely made up of improvised music.
Lighter pieces follow the main item of the performance or the ragam-tanam-pallavi and the concert ends with a mangalam, a standard auspicious signing off.
Posted by Sruti Magazine at Wednesday, June 20, 2012