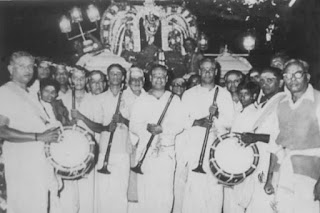 The nagaswaram has been described as the world’s loudest non-brass acoustic instrument, “a wind instrument similar to the shehnai but larger, with a hardwood body and a large flaring bell made of wood or metal.”
To south Indians, no ceremony or festival is off to an auspicious start without a nagaswaram preamble. Historically, the nagaswaram accompanied by the tavil for percussion has always preceded the temple idol taken out in procession. It is therefore naturally an open-air instrument, which explains the need for its loudness.

The great practitioners of the art of nagaswaram playing have belonged to families steeped in it, several of them in different parts of Tamil Nadu, most famously in the rice belt of Tanjavur on the banks of the Kaveri, the legacy being handed down from generation to generation through the centuries.
Some of the greatest artists in Carnatic music have been nagaswara vidwans, most notably Tiruvavaduturai Rajaratnam who had arguably the most seminal influence on nagaswaram music.
Responsible for major changes in the status of nayanam practitioners as well as concert decorum, he earned his tribe the right to wear upper garments and perform seated unlike earlier times when they had to do so standing and bare-chested.
Unfortunately, he was also responsible for the introduction of microphones, which tend to amplify the sound beyond tolerable limits. He insisted on the tambura replacing the ottu, the smallish nagaswaram look-alike that acted in the past as a drone to maintain the pitch. Today the electronic sruti box has taken its place.
Most of the finest exponents of south Indian classical music, especially the major vocalists of the 20th century, and even some of today’s stars were inspired by Rajaratnam’s music. One of the most charismatic singers of yesteryear, GN Balasubramanian, was much influenced by the nagaswara bani, especially the lightning fast brigas—a kind of modulation—of Rajaratnam that lesser mortals considered impossible of achievement by the human voice.
Semmangudi Srinivasier, the epitome of orthodox brahminhood, had great reverence for nagaswaram music. He was fond of telling the story of how he often crossed the Kaveri to listen to the incomparable music of a stalwart nagaswara vidwan, though past his best and under the influence of alcohol most of the time. Semmangudi’s eyes invariably misted over as he remembered those formative days of his music.
There have been several magnificent exponents of the art—Karukurichi Arunachalam, Shaikh Chinna Moula, the Tiruveezhimizhalai Brothers, the Semponnarkoil Brothers, and Namagirpettai Krishnan to name but a few. It is along with tavil playing perhaps the only branch of Carnatic music dominated by non-brahmin musicians, one that also features Muslim practitioners.
The nagaswaram and the tavil are endangered species. Many of the best traditions of the art are rapidly changing and lack of glamour is driving many young inheritors of the legacy to seek other professions. Temples in the state have been invaded by light music, with hardly any classical music concerts being hosted there, and the grand mallari to herald the lord’s procession getting diluted over time.
The compulsion to enter the concert hall from the temple grounds of the past to earn a livelihood as musicians has forced artists to adapt several aspects of their music to suit the changed environment. Audiences no longer flock to nagaswaram concerts.
Posted by Sruti Magazine at Friday, June 22, 2012