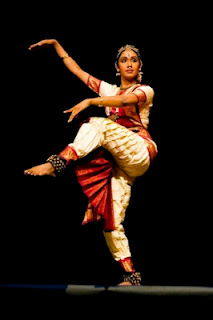 US-based Ramya Ramnarayan has sent us the link to a review of her Bharatanatyam performance at Ailey Citigroup Theater which was recently published in The New York Times. Titled “Slowly, Subtly, Invoking the Divine”, the write-up by Alastair Macaulay set me thinking. His review is refreshing and provides interesting insights into a Westerner’s perspective of solo Indian classical dance.
Accustomed as he is to watching ballerinas presenting solos which seldom last longer than two minutes, he finds the varnam “amazingly long and entirely enthralling”. He has rightly pointed out that the full solo performance is a particular feature of traditional Indian dance. Watching even young classical debutants hold the stage for almost two hours, we do take such things for granted! He has mentioned how solo Bharatanatyam makes an impression as it becomes multifaceted through connections between the human and divine, alterations between abhinaya and nritta, and the subtle relationship between dance and music.
More interesting are the comments: “Bharatanatyam is keenly three-dimensional”…. “It’s as if the body were hungry to face as many ways as possible at one time.” The writer tells you why it seems so. Click on the link below, read and add your comment on this interesting review.
http://www.nytimes.com/2012/06/12/arts/dance/ramya-ramnarayan-at-ailey-citigroup-theater.html
Posted by Sruti Magazine at Saturday, June 16, 2012