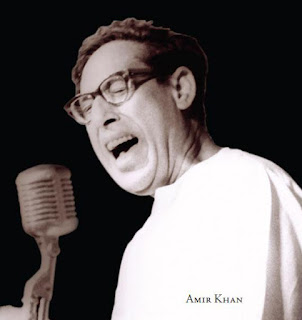 The late Ustad Amir Khan was one of the greatest Hindustani classical vocalists of all time, certainly among the most influential figures of the 20th century. His original contributions to vocal music and his mastery of the science and art of Hindustani music made him a musician’s musician, someone both vocalists and instrumentalists hold as a role model to this day. Raised in the Bhendibazaar gharana, he submitted himself to other influences, setting the highest standards of musicianship while integrating them.
Born at Akole, Maharashtra, young Amir Ali was brought up in Indore, where his father, Shahmir Khan, a sarangi player in the court, trained him in vocal music and the sarangi. Shahmir Khan developed his own method to train his son in the Merukhand discipline, a logically sequenced compendium of all the melodic patterns that can be generated from seven notes.
For the next several years, Amir Khan trained in khayal singing. Visits to his uncle, Moti Khan, a tabla expert, who arranged private concerts for the boy, prepared him for a concert career.
Unlike many of his contemporaries, Amir Khan practised only for three hours a day, in deference to his father’s wishes. Continuing this practice throughout adulthood, the ustad once said that his riyaz consisted as much of thinking about music as singing.
As a youngster, Amir Khan listened to some great musicians every weekend, when his father’s friends gathered to perform informally. These sessions often featured such great dhrupad and khayal vocalists and instrumentalists as Allahbande Khan and Nasiruddin Khan Dagar, Murad Khan, Wahid Khan, Bundu Khan, and Rajab Ali Khan.
An accomplished vocalist by the time he was 20, Amir Khan travelled from city to city between 1932 and 1937 in search of a career as a singer. In Bombay, he received some support from the musicologist, Prof. BR Deodhar, came under the influence of Aman Ali Khan of Bhendi Bazaar, spent some time in Delhi, and also enjoyed the patronage of the Maharaja of Raigadh in MP.
Merely 26 when his father died in 1937, Amir Khan amalgamated the styles of Abdul Waheed Khan, Rajab Ali Khan, and Aman Ali Khan, thus incorporating the Bhendi Bazaar, Indore and Kirana gharanas in his own style. Over the next few years young Amir Ali became known as Ustad Amir Khan even though he himself had no formal training from reputed masters. By 1950, he was the star of every music festival of importance.
Known for the contemplative, poignant tones of a masculine yet malleable voice of perfect sruti alignment, Amir Khan was a master of precise step-by-step development of a raga. His eclectic approach to music took him beyond appreciating other Hindustani greats to absorbing the best that Carnatic music had to offer including some of its ragas—like Abhogi and Hamsadhwani—which he adapted so beautifully.
According to Deepak Raja, sitarist and musicologist, Amir Khan “represented the essence of the Indian tradition, which regards music as a mystical pursuit, with spiritual evolution as its primary reward,” as clearly evident in the taranas and Persian compositions he popularised.
Amir Khan died a premature death in a car accident in Calcutta on 13 February 1974. Though a magnificent career was so cruelly cut short, his was already perhaps the greatest name among Hindustani vocalists.
Posted by Sruti Magazine at Friday, June 01, 2012