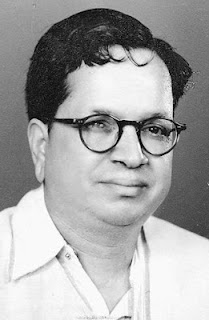 An outstanding vocalist of the 20th Century, Sangita Kalanidhi Madurai Mani Iyer was both a musician’s musician and a people’s artiste. His lilt swayed even the unlettered, uninitiated passerby with its sometimes beseeching, sometimes playful magic of pure sound. He was that rare amalgam of swara and sruti that achieved the ultimate effect of effortlessness. Not only in raga alapana and kriti rendering, but also in his mellifluous cascades of swara-s did he paint the raga in all its shades with utter fidelity. He was one of the most consistent performers in the midst of many giants of Carnatic music, yet his consistency did not mean repetitiveness; critics and enthusiasts remark on how fresh his music was throughout his career, how fresh it continues to be even today, long after his passing.
Subramanian, Mani for short, was born to M. S. Ramaswamy Iyer and Subbulakshmi at Madurai on 25 October 1912. His father, a clerk in the local court, was the brother of the famous vidwan Pushpavanam, one of the most celebrated vocalists of his time.
Mani started music lessons at the age of nine. His first guru was Rajam Bhagavatar a disciple of Ettayapuram Ramachandra Bhagavatar. Through Rajam Bhagavatar, Mani came into close contact with Harikesanallur Muthiah Bhagavatar who founded the Tyagaraja Sangeeta Vidyalayam, a music school at Madurai. Mani Iyer was one of the first students of the school.
Though influenced by the music of his uncle Pushpavanam, Mani Iyer fashioned a style all his own, a brand of singing quite unlike any other, in the process winning over a legion of followers. His music was original, without leaving the strait and narrow path of tradition. Much beloved by his rasika-s, peers and seniors among vocalists and accompanists, even that much feared breed of human being, the music critic, Mani Iyer kept it simple, his music a direct line to the divine, in its chaste if unusual vocalisation and obvious surrender to his muse. If his sweet voice earned him the sobriquet Madhura Gana Mani, his evocative rendering of the raga once so thrilled the Mohanam specialist Maharajapuram Viswanatha Iyer, that he hailed him as Mohana Mani.
Mani Iyer’s unique swara singing style was inspired by the music of Mazhavarayanendal Subbarama Bhagavatar, a regular performer in Madurai during his formative years in music. Mani Iyer attributed his penchant for rare raga-s like Malavi, Janaranjani and Rudrapriya too to his early fascination with the Bhagavatar’s music.
In his era, Mani Iyer was probably the only vocalist to appeal to the young newcomer to Carnatic music as well as the crusty old veteran of many a timeless concert of its hoary past. The man was by all accounts as lovely as his singing-kindness and affection personified, capable of spontaneous appreciation of his fellows of the day.
To Mani Iyer, the audience was king and his concert commitments were sacrosanct. He had this wonderful rapport with his rasika-s right through his career. Even in his very last concert, despite illness and a high temperature, he acceded to a request for Nagumomu shouted from the depth of the hall by a devotee of his music, after a strenuous couple of hours and post tani avartanam. His constant response to repeated requests for Eppo varuvaaro (When will He come?) was “Varuvaar” (He’ll come), and invariably come He did, before the concert was over.
Mani Iyer received invaluable support from his brother-in-law and disciple Vembu Iyer, his devout sishya, vocal accompanist and nursemaid till the very end. Constantly beset by health problems, Mani Iyer died at the age of 56, but his legacy lives on in the music of Vembu Iyer’s son Sangita Kalanidhi TV Sankaranarayanan, and his son and daughter, promising young vocalists both.
Posted by Sruti Magazine at Saturday, June 02, 2012