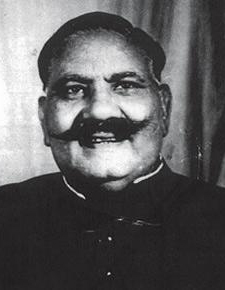 His was perhaps the greatest voice of the Patiala gharana. Known for his unorthodox ways, Bade Ghulam Ali Khan became synonymous with the thumri, though he was a master of the khayal as well, with a uniquely expressive voice, once described by Mohan Nadkarni as capable of “anything from a mere quiver of resonance to a flood of melody.” It spanned three octaves. His singing was known for its seeming effortlessness, sweetness, flexibility and ease of movement at different speeds. In his music, he blended the best of his native Patiala-Kasur style with the traditions of Behram Khani dhrupad, Jaipur and Gwalior.
Born in a musical family at Kasur, Punjab, now in Pakistan, to well known musician Ali Baksh, Ghulam Ali first learned to play the sarangi before he became a concert vocalist, because at the age of twenty, he had to earn a living to support his mother and brother Barkat Ali, when their father remarried.
A favourite of his peripatetic uncle Kale Khan, Ghulam Ali travelled with him when still a boy to Bombay and Poona before he returned to Lahore where his father had settled by then. He later went to Jammu and Sind following his father. Apparently all these travels had an impact on Ghulam Ali Khan’s music, as evident in the magical appeal of his Pahadi thumris. His several khayal and thumri compositions under the pen name of Sabrang had the same bewitching quality as his voice.
Khansaheb was sometimes accused of “untidiness” in the manner he presented ragas, eschewing the leisurely progression of alap, but mixing it up with swara singing and superfast taans, but there were occasions when he could elaborate a raga as well as any of the great masters. His delineation of ragas like Yaman, Bhoop, Malkauns, Kedar and Chhayanat have been described as masterly, with delightful improvisations following one another enchantingly before the listener could even settle down.
His appreciation of tonal purity led him to many sources including Sindhi, Punjabi, Purabi and Kashmiri folk songs as well as Iranian and Arabic music. His thumri rendering acquired a rich tonal quality as a result of all this varied exposure. It was also embellished by his spectacular Punjabi harkats.
As he had been residing at Lahore at the time of India’s partition, Bade Ghulam Ali Khan was naturally a Pakistani citizen, despite his frequent visits to India. He loved India and the followers of his music here so much that with the help of Morarji Desai, then chief minister of Bombay, he acquired Indian citizenship in 1958.
Originally known as a mehfil singer only in West Punjab, Pakistan, he became known in all of undivided India when he sang at a music conference at Calcutta. He made his first public appearance at Bombay in 1946, following it with concerts at Surat, Ahmedabad, Poona, Kolhapur and Belgaum. Eventually he settled down at Bombay where the state government housed him in a bungalow at Malabar Hills. He was popular in the South as well earning the admiration and friendship of great musicians like MS Subbulakshmi—whom he described as Suswaralakshmi—and GN Balasubramanian.
After suffering a paralytic stroke in 1961, Bade Ghulam Ali Khan made a brave comeback to perform again. He passed away at Hyderabad on 23 April 1968.
Posted by Sruti Magazine at Tuesday, June 05, 2012