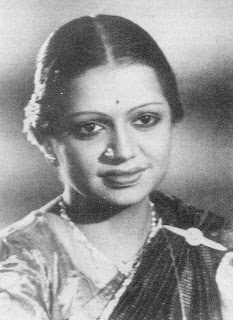 MS Subbulakshmi, DK Pattammal and ML Vasanthakumari have been described as the female trinity of Carnatic music.
Of the three, Sangita Kalanidhi ML Vasanthakumari perhaps held the greatest popular appeal, while at the same time pleasing the pundits. Hers was an exciting brand of music, typified by the brilliance of her brigas and swara fusillades, based on mastery of raga and tala. She was also an expert at pallavi singing and sruti bhedam.
Born at Madras on 3 July 1928 to musician parents Koothanur Ayyasami Iyer and Lalithangi—his second wife belonging to a devadasi family—Vasanthakumari was a child prodigy, whose precocity her parents chose not to exploit for publicity or money. Lalithangi had learnt music from Coimbatore Thayi, Flute Subba Rao and Veena Dhanammal. Iyer and Lalithangi played an important part in propagating the devarnamas of Purandaradasa, and were also interested in Hindustani music. Young Vasanthi naturally grew up in a wonderful musical atmosphere, listening to the songs of Purandaradasa, the Trinity and other composers, and visiting Hindustani musicians.
But for the insistence of her charismatic guru, GN Balasubramanian, Vasanthakumari might not have become a career musician, as her parents, disappointed by lack of recognition, wanted her to pursue a proper education rather than music. She completed Senior Cambridge at school and acquired proficiency in English, developing a keen intellect that was often reflected in her music. It was GNB who had heard her singing to herself once when he happened to be rehearsing for a programme with Lalithangi and DK Pattammal who convinced them to let her learn from him.
Vasanthi who started accompanying Lalithangi in her recitals from the age of 11, gave her first solo recital in Bangalore unexpectedly in 1941, when she was barely 13, with Lalithangi having to withdraw because of an attack of asthma. Introduced that evening to the audience as Madras Lalithangi Vasanthakumari, she gradually became famous as MLV.
Proving a worthy student of her great master, Vasanthakumari developed her own original style of singing, based as it was on GNB’s exciting bani. She earnestly followed her guru’s advice that she must imbibe the best attributes of his music but must not imitate her.
Vasanthakumari’s raga alapana, for instance, was marked by the same step-by-step development patented by GNB. She was also outstanding in niraval, with brigas flowing effortlessly from her silvery voice. In swaraprastara, too she was inspiringly creative and original, striking surprising swara combinations with utmost fluidity. These forays were once described as “unpremeditated products of a fertile imagination, making it difficult for accompanists to follow.” She was quite at her best in the ragamalika swaras she tended to render as part of ragam-tanarn-pallavi. The ragamalika could be of mainstream ragas like Kanada, Kedaram, Yadukulakambhoji and Sahana, or rarer ones like the Hindustani Tilang, Revati, Sindhubhairavi, Kalavati and Chandrakauns.
Vasanthakumari’s repertoire covered quite a wide range. In addition to the compositions of the Trinity, she often presented modern composers like Papanasam Sivan, Poochi Srinivasa Iyengar and her GNB, or even her own contemporaries Ambujam Krishna, R. Venugopal, Periasami Thooran and Lalgudi Jayaraman.
Vasanthakumari’s kutcheris usually included besides ragam-tanam-pallavi, a varnam, a kriti in a major raga like Sankarabharanam, Kalyani, Bhairavi, Kambhoji, Todi or Kharaharapriya, kritis in ragas like Amritavarshini, Mohanam, Arabhi, Andolika, Hindolam or Poorvikalyani and lighter compositions following the main item, and a tillana to be sure. Her exquisite rendering of Purandaradasa songs was a major draw in her concerts.
MLV was an excellent and caring teacher who took a loving interest in the careers of her disciples. Her daughter Srividya was a talented dancer who became a highly respected actor in Tamil cinema. Prominent among her students have been such successful artists as Sudha Ragunathan, Charumathi Ramachandran and A Kanyakumari. MLV also taught music at the Rishi Valley School at Madanapalle.
Posted by Sruti Magazine at Wednesday, June 06, 2012