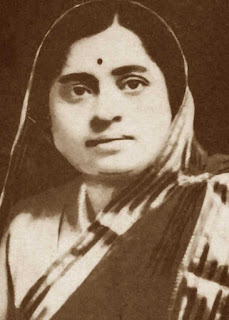 She started learning music when she was eight, but had to search far and wide for nearly two decades before she could find a permanent guru. And when she found the guru of her dreams, he stipulated stringent conditions, which she followed faithfully, even delaying her appearance on the concert stage until her ustad passed away some 25 years later.
When at long last she started performing, Kesarbai Kerkar took the concert platform by storm, with a voice that fluidly covered three octaves, exquisite presentation of khayals, and detailed exploration of ragas in a deep, full-throated voice. Her serene alap invariably gave a clear outline of the bandish that followed and her sense of rhythm was unerring. The stamp of Alladiya Khan’s magnificent Jaipur-Atrauli gayaki was unmistakable in Kesarbai’s majestic vocalisation.
Born on 13 July 1892 at the village Keri near Panaji, Goa, Kesarbai Kerkar spoke Konkani at home. On a prolonged visit to Kolhapur when she was eight, her family enrolled her with Abdul Karim Khan, the pioneer of the Kirana gharana, for music lessons. After ten months, the family moved back to Goa, and Kesarbai’s music lessons were suspended for the next five years.
Kesarbai did not give up. She found splendid if peripatetic teachers in Ramakrishnabuva Vaze, sitar maestro Barkatulla Khan (when the family moved to Bombay) and Bhaskarbuva Bakhale who integrated the best of Jaipur-Atrauli, Gwalior and Agra in his music, but by 1918, Kesarbai was back to square one as each of these gurus either moved or became too busy with their own concert careers to devote time to the young disciple’s continued grooming.
This is when Kesarbai adamantly clung on to her determination to learn music from the formidable Alladiya Khan. Having been exposed to his teaching for three months in 1912, she “sensed that his music had some exceptional qualities.”
Kesarbai had to resort to extreme measures including the exertion of pressure from influential patrons to persuade a reluctant Alladiya Khan to teach her. Alladiya Khan laid several conditions before accepting her. One of them allowed him to travel and take her with him during those travels, and another prohibited her from appearance on the concert stage except while accompanying him.
In time, she became a much-loved shagird whom Alladiya Khan loved as a daughter. Towards the end of his life, he wanted to teach her all he knew, but Kesarbai was happier polishing what she had already learnt from him. Still she had a considerable stock of common and rare ragas, which she delivered in an inimitable style, posing melodic riddles, presenting unusual taan patterns, with her intricate, complex gamak taans often creating an illusion of extreme speed.
Like her music, Kesarbai was elegant and dignified. She shunned publicity, even avoiding contact with radio, press and camera. For a long time, she refused permission for the public playing of the few discs she released. Until she ran into Dhondutai Kulkarni who was as determined to learn music from her as she had been with Alladiya Khan, she had hardly any students to carry on her legacy.
Calcutta audiences in particular adored her music, but every mehfil of Kesarbai Kerkar was exciting, with her grand akara-oriented singing in the best Alladiya Khan tradition. Making such ragas as Bihagda, Nand, Maru Behag, and Basanti Kedar her own, she strode the Hindustani music field like a true colossus until 1964, when she retired from the concert platform.
Posted by Sruti Magazine at Wednesday, June 13, 2012