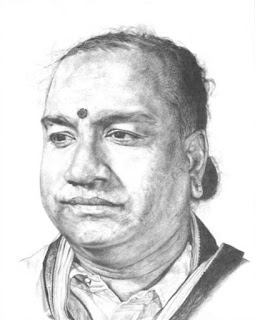 He was described as the grand cavalier of Carnatic music. His music could not be confined within the limits of orthodoxy. Hailed for his melodious, sruti-aligned voice, he was also criticized for occasional lapses in grammar.
Yes, Sangita Kalanidhi Maharajapuram Viswanatha Iyer was known for the lakshya orientation of his music, “the romantic sweep of his imagination.” His creative raga essays—in Arabhi, Bilahari, Hamir Kalyani, Mohanam, Mukhari and Yamuna Kalyani—distinguished him from his contemporaries, from Kanchipuram Naina Pillai and Konerirajapuram Vaidyanatha Iyer in the early years, to his own disciple Semmangudi Srinivasa Iyer, GNB and Ariyakudi in the second half of his career. They were beautiful, exciting explorations in a husky, briga-rich voice, loved by his audiences even if they were sometimes touched by alien presences. He was a devotee of Tyagaraja and revelled in filling his concerts with his great compositions.When he did take up the songs of other composers, he rarely failed to do justice to them. With a noticeable liking for Tamil songs, he was partial to the verses of Gopalakrishna Bharati, which he sang with much fervour.
Maharajapuram’s mastery of raga music was seen at its best when he ventured into moving ragamalika forays into Sanskrit slokas or Tamil viruttams. His swaraprastara was marked by the brevity of his korvais, often not exceeding chains of three swaras apiece.
Viswanatha Iyer was born in a village—whose name he made synonymous with his own—on the banks of the Kaveri in Tanjavur district. His father was a gifted amateur singer, who specialized in raga alapana and the kind of ragamalika slokas and viruttams that Viswanatha Iyer was to make his own in later life.
Young Viswanathan showed considerable promise as a singer and received early training from the likes of Umayalpuram Swaminatha Iyer of Tyagaraja’s sishya parampara and Palani Rangappa Iyer, a ghata vidwan. He also benefited from time spent with senior percussionist Palani Muthiah Pillai.
Making his debut in 1917, and thriving as a performer at weddings and temple festivals, Viswanatha Iyer peaked in the period 1920-27. Followed a bad patch of nearly ten years, when he fell prey to the perils of fame and popularity, though he acted in the film Nandanar (1935) and sang some memorable songs in it during this period.
He made a triumphant comeback to top form in 1939 with an epochal concert at Jagannatha Bhakta Sabha, Madras. In subsequent years, he reached such great heights in his own individualistic style that GNB once said: “The aesthetic involvement in listening to Maharajapuram was a damper to listening to stereotyped music.”
As a man, Maharajapuram was known for his ready wit and often vulgar humour, and his tendency to dominate concerts at the expense of his accompanists, but his music was unique, incapable of being labelled. His voice and his singing style were likened by admirers to stardust and lightning streaks, his treatment of compositions to grace and colour. He was even called a lone ranger and solitary hero in the realm of Carnatic music. His sishya Semmangudi came in time to be known as the pitamaha of Carnatic music, his son Santhanam became the biggest crowd-puller of his era, but Maharajapuram Viswanatha Iyer in his time was an artist supreme, untamed by the need to conform.
Posted by Sruti Magazine at Thursday, June 14, 2012