Pages from the Past

A Dancer's Quest for Peace

By V Ramnarayan
(Reproduced from Sruti issue no. 2, November 1983) 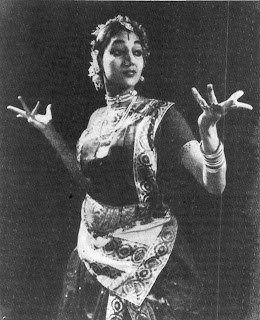 Usha Narayanan is an unusual dancer. Her dancs is inspired and informed by Arayar Sevai, a unique type of ritualistic worship in some vaishnavite temples. She did not start out this way. In fact, although she showed talent in dancing and singing even as a child, she never nursed ambitions of becoming a serious performer. There was much music in her mother’s family, and interest in music and dance, and coaching in both continued for Usha through school, but she rarely went to recitals, as she lived mostly in cantonments and military quarters, far from the city, a consequence of her father’s job in Defence Accounts.
Usha married at the young age of seventeen and her lessons in dance and music continued. “Because I enjoyed dance and music I took my lessons seriously as I had earlier, but no thoughts of a career in dance crossed my mind. I learnt music from Sri L.T. Raghavachari who was a very sincere teacher.”
Great misfortune befell Usha, who lost two of her three children under tragic circumstances. Shock and grief overwhelmed her and she was filled with a deep need to obtain answers to basic questions pertaining to life and death. Self-realisation and the need to come to terms with life became imperative. “But I was still in a state of shock and didn’t know what to do,” she told us. “That is when my husband advised me to take up dancing seriously. After all dance is a kind of yoga or therapy.”
Usha then learnt bharatanatyam from Nana Kasar, a disciple of Parvati Kumar whose guru was Chockalingam Pillai. She received a scholarship (to learn bharatanatyam) and, after five years of rigorous training, became a performing artiste. “But all the time I used to tell my guru that I was in search of answers to my questions,” she told us. “That quest made me read all the books available on our dance.”
Usha wanted to discover whether dance was the means to an end or an end in itself. She learnt that, according to the sastras, devotion to the supreme is the final goal and dance is a means to achieve this final goal, although we can also dance for our own pleasure and our own satisfaction; but when we do that, it amounts to going inward rather than opening out.
Usha then tried to depict the emotion of bhakti in the traditional bharatanatyam mode and was yet deeply unsatisfied. To her it seemed everything—karma, the cycle of birth and rebirth, sin—was portrayed as dukha or unhappiness. There was something missing. “How do you show antaryamitvam (God’s omnipresence)?” Bharatanatyam did not provide the answer. “I found I was doing injustice to dancing. I was not satisfied. A page from Natyasastra seemed missing”.
Once again Mr. Narayanan showed the way. He was the one who suggested that Usha make a study of the ritual of Divya Prabandham sung in temples. She took his advice and what followed made all the difference. Watching the Arayars was, a mystical experience; she watched them dance and it cleared so many of her doubts. Divya prabandham was the answer, the dance in the temple was the answer. She was filled with peace: She said to herself: “Now my life is complete. Today if I have to leave this place, I have no attachment to anything material!”
When we asked Usha what was the difference between bharatanatyam and Arayar Sevai, she explained it by illustrating it with one of her own experiences. “At the Indian Council of Cultural Relations, I was asked to do both bharatanatyam and Arayar Sevai. I entered the stage and first performed Arayar Sevai, the truly devotional part of my dance, I concentrated hard and the audience watched in rapt attention. Then I followed it with bharatanatyam, which I did effortlessly. I slipped from the higher worship to the lower, secular dance. But in another programme I did the reverse, performing bharatanatyam first. When I tried to follow with Sevai, I suffocated. I couldn’t reach that higher plane. I realised Arayar Sevai is a direct communion with God; you forget your surroundings.”
Usha has made a keen study of the tradition of Arayar Sevai and she is continuing it. The Arayars usually do not easily part with their knowledge but have shared much with Usha because of her great devotion and piety. In the opinion of some, she has brought out into light an unknown form of ritualistic worship and is developing it into an art form. She has collected enough material to write a research paper, which she has in fact done, but she has not submitted it to any university. Once the Sangeet Natak Akademi offered her a fellowship to carry out documentation work in this area, but Usha lost interest when she was asked to obtain certification from the Arayars that she was taught the art by them.
Will she teach anyone who is willing to learn Arayar Sevai from her? Usha’s reply to this question underscores her philosophy, her whole approach to dance. “I will, if the student comes to me in the true spirit of devotion and wants to learn this dance for the same reasons as I did. Not to make a career of it, but for reasons of bhakti. I will be only too happy to pass on my knowledge to anybody who has the same attitude as I have.”
(with inputs from S. Muthumeenakshi)
Posted by Sruti Magazine at Friday, July 20, 2012