The late vocalist-painter S. Rajam
In conversation with V Ramnarayan
Was there ever a conflict between music and painting in your life? Especially in childhood? 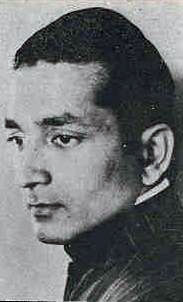 No. There was no conflict. I used to paint at home, go to school, sing, do everything. I used to paint upstairs on the roof. The neighbour from the opposite house, an army man, bought me a paint box. It was my treasure. Before that I used to make paint with colour powders.
Those days, I had long hair and looked smart, cycling everywhere. “Master Rajam,” they used to call me. You know, the atmosphere at home was full of music. I started performing on AIR when I was 13. I performed on the second day of AIR-Madras. D.K. Pattammal sang on the first day.
My painting partner was Lingiah, whose nephew Maniam became famous as an Ananda Vikatan artist. I was in the third form at school when Lingiah joined the Madras School of Arts. He was still there when I joined after my sixth form. With a double promotion I went past him as well. He was a superb artist. He committed suicide after being afflicted with leprosy. It was his artistic genes that Maniam inherited. True to the tradition of his community, he was able to make the most intricate replicas of adhikara nandi and such objects of worship.
Devi Prasad Roy Chowdhury was the Principal of the School of Arts. He taught us Western art. K.C.S. Panicker was my senior. I took to water colour painting. Sculpture was compulsory. I also did carpentry. The Victoria Technical Institute was next door to us. They commissioned work from us, doing imitation Kangra valley paintings on lampshades–deer, musicians, raga-s and ragini-s, polo hunting and so on. We were paid as soon as we supplied the paintings to VTI. The carpentry section was one of the best.
In learning music, I had some great teachers, Papanasam Sivan, Madurai Mani Iyer and Naina Pillai among others.
What scope did you have as a career artist? 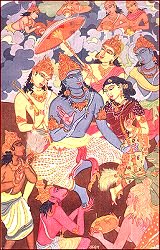 There was no prospect of any income, until K. Chandrasekharan introduced me to Kalaimagal. I learnt much more on my travels than at the School of Arts. I travelled in all for eight years–Ajantha-Ellora, Elephanta, Sittannavasal, even the Sigiriya Caves in Ceylon and learnt by observation. My music concerts with Balachandar took us to many of these places. He used to play tabla with his right hand and harmonium with his left hand. The success of Seeta Kalyanam led to these tours.
After my first visit to Ajantha, I decided to hang up my paint brush and did not touch it for two months. What fantastic work! They say 40 students to every master worked in ten to 15 areas demarcated in the caves. They painted on cloth in the lower tier of the caves and then transferred the paintings upstairs. The Sistine Chapel was nothing compared to Ajantha, where there were no facilities. They made their own paints, crushing stones and herbs together and stored them right there in the caves. The gigantic Buddha there has a face 4’ by 4’. The princess, Black Beauty, wears innumerable pearls. Breathtaking!
To go to Sittannavasal, you had to cycle 13 miles from Devakottai. I went to the Jain temple there when I was a student at the School of Arts. A pond full of lotuses is painted there, with buffalos, fish, frogs, crocodiles and sanyasi-s carrying flowers in their hands. I couldn’t get up for three days, after collapsing in sheer astonishment. The School of Art did not teach us any of this great art. In fact, Roy Chowdhury tore up any painting done in the Indian style. I refused to allow him to tear up my work.
Posted by Sruti Magazine at Friday, July 06, 2012