The late vocalist-painter S. Rajam
In conversation with V Ramnarayan
Can you describe the music atmosphere at home? 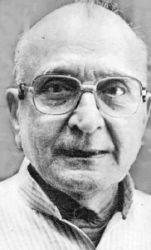 You know how my father gathered great musicians like Ariyakudi and Maharajapuram at home and how he organised concerts at a hall he built upstairs at the suggestion of Malaikottai Govindaswamy Pillai (Sruti 83, August 1991). So I was fortunate to have many leading musicians like Ariyakudi, Papanasam Sivan, even Harikesanallur Muthiah Bhagavatar teach me songs.
Appa played the veena and so did I, before I switched to vocal music, as I was enamoured of the scope of the human voice. Appa used to buy unused gottuvadyam-s, convert them into veena-s and distribute them. I trained Natesan to fix frets on to the instruments to convert them. Those days, I was yet to join AIR as a staff artist. Performing for AIR meant that you were picked up by car by white-uniformed staff, served coffee at AIR and generally treated like royalty. The exception was the time I came for an AIR programme from Coimbatore during the wartime evacuation of Madras. Shooting for the film Sivakavi starring M.K. Thyagaraja Bhagavatar was going on at Coimbatore, and Appa had asked me to bring a veena from the house of “Shylock Iyengar”, a well known advocate who lived in Triplicane. Madras was virtually deserted and I walked all the way from the Central railway station to AIR on Beach Road. It had been raining heavily and there was knee-deep water inside AIR. The recording was done upstairs. Afterwards, I walked to Triplicane and transported the veena in a jutka, the only transport available, to Central.
To watch Thyagaraja Bhagavatar at work for Sivakavi was a revelation. The music director was Papanasam Sivan, without whom Bhagavatar would not agree to sing in a film. 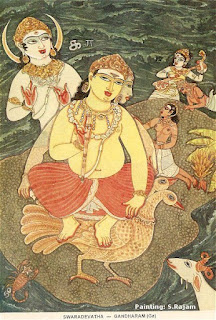 There was this beautiful girl from Ceylon who was auditioning for the film with Sivan. She sang the Mohanam raga kriti Kapali, (Rajam demonstrates how she sang with very straight notes, missing the raga bhava completely. “Karunai vadanam poli” he imitated her). Sivan listened without expression. He was such an innocent man, with no artifice in him. He had great affection for me. He would teach me for hours, sing continuously. I was his best student.
In Seeta Kalyanam, Sivan just retained the Tyagaraja compositions intact, only rendering the lyrics into Tamil. Shooting depended on the availability of sunlight. The studio had a 40’-50’ tall glass ceiling to let the light in. Still, the final result was often rather dark! When the sunlight was streaming in we had to sing on the spot. It was very difficult to keep our eyes wide open and stare into the camera, reproducing every sangati in the original composition.
Posted by Sruti Magazine at Monday, July 09, 2012