The late vocalist-painter S. Rajam
In conversation with V Ramnarayan 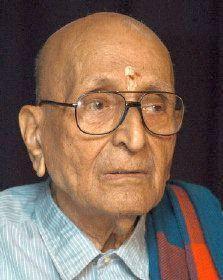 How were you and Balachandar different as musicians?
He did not study music in a regular fashion. He didn’t know the grammar of music. He was very intelligent, though he did not utilise his gifts fully. When he played ragam-tanam-pallavi, he had no equal.
Unfortunately, he started focusing on stretching the strings. That proved to be his undoing. You can’t depend on your muscles in music. When you are older, you can’t count on your virility. The same is the case with dance. Only abhinaya can serve you in the long run.
Did he learn from you?
He accompanied me on the khanjira and tabla for ten years. It was pleasant, enjoyable music, not like regular kutcheri-s. He learnt by kelvi gnanam. He would not learn from me. It was a matter of prestige for him.
How did you get the idea of depicting music in your paintings?
Hari Rao, son of Sangita Kalanidhi T.V. Subba Rao, was the manager of the Higginbothams bookstore. He showed me letter pads with Omar Khayyam illustrations and asked me if I could do something similar for Carnatic music. That is how I did the series for our music. Sruti Pattabhiraman saw the letterpads and asked me to do similar illustrations to be published every month. Semmangudi told me he liked the letterpads so much that he did not use them to write letters, keeping them with himself. I wanted people to use them and create interest in our music in the recipients of their letters.
Any unforgettable experiences in your music career? 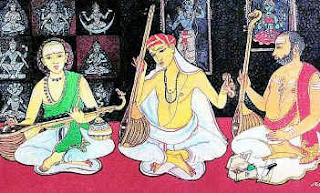 I think it was 1980. I was singing at a 24-hour Dikshitar akhandam at Ettayapuram. My painting was the backdrop to the 40’ by 40’ stage. Mr. Sundaram, IAS, who inaugurated the concert, had come from Tuticorin. “Enna saar paadarel?” he asked. I said I was going to sing Sree Mahaganapatim. His response was instantaneous. “I don’t know about all that. Sing Anandamritakarshini, or I’m leaving,” he said. I obliged, sang with a lot of feeling. Everyone was happy. Sundaram took me to Tuticorin for lunch in his car and sent me back in the evening by car. As I entered Ettayapuram, it was raining cats and dogs. The temporary roof had been blown off. I told the organisers, “Don’t blame me or Sundaram. It’s only a reminder for a permanent structure here.” My singing the raga Amritavarshini had the same result again during my tour of the U.S.A. in 1982. At the end of a 30-day tour, it rained heavily after a sunny morning following my Anandamritakarshini. Of course, I have sung the song many other times with no change in the weather whatsoever!
More memorable in a strictly musical sense was a concert in Washington during the same tour. It was the last concert of the trip. I sang Janaki Ramana elaborately with alapana, niraval and swaraprastara for more than an hour. I was quite pleased with my effort. As I was about to pack my tambura and leave the hall, two ladies approached me. “That was a lovely Suddha Seemantini. It reminded us of Naina Pillai.” I was stunned. Ten thousand miles away from home, here were two women who had heard my guru Naina Pillai and who could tell Suddha Seemantini from Todi. I had gooseflesh. “What more do I want amma?” I said to the ladies.