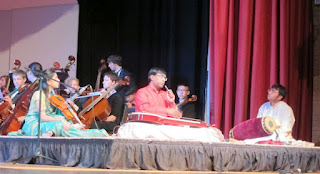 “I would have loved to hear John Coltrane explore the Pancharatna kriti-s,” says Mike Marquesee, a man better known for his writings on politics and cricket. He is of course referring to innovation in Carnatic music and the late John Coltrane’s is among the great names in jazz. Marquesee is modest when he speaks of his credentials to write on Carnatic music, but his insights are brilliantly direct and praiseworthy in a westerner attracted to but hardly expert in it. He says, “Its history is a history of innovation and broken taboos—relating to gender and caste, public and private. The kutcheri as we know it dates only from Ariyakudi and the 1930s. In a single evening it can include compositions with lyrics in Tamil, Telugu, Sanskrit, Kannada, Marathi and Hindi. I can’t think of another musical culture with a comparable spread.”
Another westerner, Todd McComb of Australia, also seems to have an excellent understanding of the quintessence of our classical music. Comparing the two systems, he says, “Melody and rhythm are likewise more complicated in medieval music than in the more commonly known Western music of the 18th century. Although the music can hardly be said to compare to the sophistication of raga and tala, and especially the elaboration of which modern Carnatic artists are capable, French musical terms of the 14th century curiously mirror Indian music. There is the term “colour” for the melodic basis of the piece and the term “talea” for the sequence of beat patterns, broadly called “isorhythm”. ”
“It would be naive to suggest,” he continues, “that 14th century Frenchmen visited India and returned with the ideas of raga and tala (and, at any rate, their music can be extremely complicated in its own way, by way of counterpoint and simultaneous texts), but what can perhaps be suggested is that basic ideas on melodic and rhythmic patterns are natural to the human mind.”
Closer home, S. Rangarajan, writing in The Hindu, says: “The scope for innovation and creativity in Carnatic is as vast and as deep as the seven oceans. There are jetsam and flotsam on the surface of the sea, but can they in any way pollute the ocean?”
Sruti’s mission statement stresses the encouragement of innovation as much as it does the preservation of tradition. But innovation in classical music is akin to changes to the Indian Constitution. It cannot alter the basic structure. Carnatic music has always fostered innovation, as so clearly demonstrated by the introduction of Western instruments, the adoption of north Indian raga-s, and the evolution of the present-day concert format. Yet, we do not want the fundamental character of the music to be diluted or modified in the name of improvisation or fusion. ‘Organic’ is perhaps the word we may use most meaningfully while describing the path innovation should take.
Among recent efforts to bring the two systems closer together have been VS Narasimhan’s Madras String Quartet’s presentations of the songs of the great composers of Carnatic music, particularly the Trinity. It is Narasimhan’s dream to arrange these time-tested creations for performance by western symphony orchestras. And Chitravina N Ravikiran seems to have taken the first steps in this direction.
On 13 May, the California-based Sacramento Youth Symphony (SYS) Orchestra collaborated with Ravikiran to play a re-creation of a Tyagaraja’s piece arranged for the orchestra. According to a critic, “the repertoire, carefully chosen by conductor Michael Neumann, kept the Indian spirit even in traditional Western pieces such as The Crown of India suite by Edward Elgar and Kromsky’s Song of India.”
Posted by Sruti Magazine at Wednesday, July 04, 2012