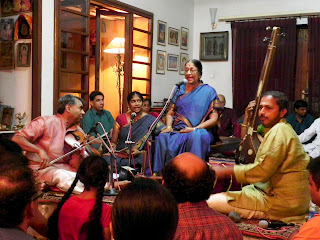 As soon as Rama Ravi started her concert with the chastest Vegavahini - Dikshitar’s solemn and weighty Veenapustakadharini - she made it clear that her music would merit extremely close listening. Her voice settled down, as did the audience who were all around her -- sitting on every conceivable spot, on chairs, tables, mats, the floor, aisles, and even standing in a corridor! -- through this song and the Yagnadulu that followed and had opened out brightly by the time she started singing a ravishing Nattaikurunji alapana. Ekkalatttilum was rendered with effortless mastery, with each sangati embellished with ornate, perfectly plotted and executed gamaka-s.

Rama Ravi surprised us with Tirujnanasambandar’s Tevaram, Kaadalagi Kasindu tuned to Bhairavi, and proceeded to sing a searing neraval and swaram, finding innumerable permutations of notes all to easily to come back to the eduppu. R. K. Shriramkumar on the violin dived headlong into the Bhairavi and shadowed her every movement with infectious enthusiasm and staggering expertise.

The centrepiece of the evening was a resplendent Sankarabharanam. Subbarama Dikshitar’s Sri Sankaracharyam, not often heard today on the concert stage, was the chosen kriti. After a rather brief niraval and swara prastaram, Rama set the stage for Arun Prakash’s tani avartanam which featured a thrilling section in the misra nadai. The slight dissonance between the audience counting eight as two fours and Arun Prakash keeping sevens to the same time interval possessed a rare unsettling beauty that was only accentuated when he landed on the arudhi and switched back to chaturasra nadai.

We introduced Rama Ravi to the audience as a torchbearer of the Dhanammal bani, and after the concert, she said, “You put pressure on me with this reference to bani!” There is this quality about the Dhanammal style of music that defies definition, a beauty that cannot immediately be grasped or explained. There are intricate phrases that are minutely tuned and rendered, but can never be accurately represented on paper. The bani wraps every idea within the musical and emotional core of a particular raga or composition, and the individual musician recreates that core that is handed down and decorates it with her own musicianship.

The two padams performed that evening—Kuvalayakshiro in Gaulipantu and Ninnujuchi in Punnagavarali—were soaked in that bani, and while the rendition was, one felt, more virtuosic than sentimental, it had great emotional depth.  Arun Prakash, a master of the minimal, a king of silences, outdid himself in the Ninnujuchi, playing so little that he must have only touched his mridangam ten times during the entire padam. But those ten touches were so expertly placed that they added to the silences, and infused them with the desperate emptiness that the lyric portrays.

This was, for Oli, a most satisfying evening -- a substantial and knowing audience that featured many young musicians and veterans, an intimate venue in musician Aruna Ranganathan’s house, and most important, music of the highest quality.

Rama Ravi, student and proponent of the Veena Dhanammal bani of music.
“She sang `Poosadaramu’ better than those who learnt it directly from me,’’ said the redoubtable T. Brinda, when she heard the girl render the padam absorbed from her own radio lesson. In Kalakshetra, Rukmini Devi put the child in the seniors’ class. T. Viswanathan persuaded her to join his department in Madras University rather than the Central College of Music. Hearing her in a competition, D.K. Jayaraman gave her lessons for three years. M.S. Subbulakshmi came to her concerts. Semmangudi Srinivasa Iyer remembered her Kambhoji 20 years after hearing her ‘Adiyokka’.’’

Embellished with the technique and pathantaras of such veterans as Mysore Vasudevachar, Brinda, Viswa, Budalur Krishnamurti Sastrigal and M D Ramanathan, along with a natural flair and a voice suited for the glides and microtones of the Dhanammal bani, Rama Ravi’s music is a delectable treat on both intellectual and emotional levels.

Her brand of music, with the emphasis not on performance, but on the internalization of aesthetics and on great conviction in one’s style, has ardent followers amongst musicians and non-musicians alike.

R K Shriram Kumar, virtuoso violinist and vocalist, hails from a family of musicians. He trained under his grandfather, the celebrated violinist, R K Venkatarama Sastry, Savitri Satyamurti and V V Subramanyam, besides his tutelage under D K Jayaraman for vocal music. In a performing career spanning almost two decades, he has absorbed and assimilated the styles and pathantaras of several doyens while accompanying them.

His adherence to classicism, understanding of banis, the tonal purity of his violin, sense of proportion and his vast repertoire help enrich every moment of a concert and make him an extremely sought after accompanist.

Email ThisBlogThis!Share to TwitterShare to FacebookShare to Pinterest
Labels: Vivadi