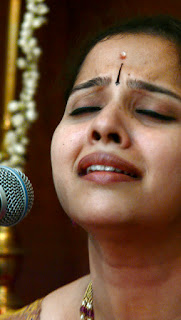 B. Ganapathyraman, who played the mridangam for K. Gayatri’s concert—Oli’s eleventh event—said to her after the concert, “I didn’t know there was this Gayatri inside you!” To be honest, we didn’t either.
The theme for K. Gayatri’s concert, classical ragas derived from folk music, presented her with an unusual challenge—to maintain utmost classicism without losing sight of the inherent folksiness of these ragas. To say she rose to this challenge is an understatement; she owned the challenge and rose high above it. She expertly wove in the three anya swaras—the striking antara gandharam, the subtle suddha dhaivatam and the earthy kakali nishadam—derived from the raga’s folk origins, into her Anandabhairavi alapana and still kept the raga within the classical boundaries that Dikshitar and Syama Sastry drew for it. She stitched swinging swara patterns around Kedaram’s curves. She played with Maand’s oddities (Neerajadalanayana), singing it, interestingly, in the main course section of the concert, almost as if she wanted to prove that it is no less classical than the Neelambari that preceded it.
And what a Neelambari that was—flowing, swaying, languorous, lilting—striking at the heart of the raga to touch ours! In the alapana, it initially seemed like she spoke the raga’s language in a rambling sort of way. But as it went along, and one phrase just seemed to flow from the other, as if each were the logical consequence of the previous, the rambling made full sense. Sometimes, there is beauty in formlessness. Sometimes, you perceive that beauty better when it is contrasted with form. The swaraprastaram for Dikshitar’s Amba Neelayatakshi was a masterwork in resourcefulness and maturity. The sheer variety of swara combinations to come back to the sahityam, and the immaculate control over every one of these ideas without losing a sense of discovery or spontaneity, was simply astounding. Usha Rajagopalan, on the violin, matched Gayatri’s round-for-round, playing with her ideas, inverting them, sometimes, feeding her new ones. It was a fascinating conversation.

Gayatri’s swaraprastaram through the concert was consistently brilliant. She sang in various styles, from the fluent and brisk swaras for Kedaram and Kedaragowlai to the meandering and exploratory in the Neelambari, with the Anandabhairavi somewhere in between. Ganapathyraman’s mridangam sang just like her, his anticipation, his finesse, his clarity of vision, taking each round of swara to new heights. She never lost sight of the lakshya of the raga or the lyrics in exercises in combinatorics or mathematics.
That last aspect is what seems to set Gayatri apart from her peers—she has a feel for the lyric, and an intuitive understanding of why a particular raga, or a particular phrase, suits a lyric. And this helps shape not only how she approaches a kriti, but also her manodharma, which she seems to see not as an aspect divorced from the kriti, but an ornamentation to it.
Andarama Soundaryam in Kedaragowlai, the central piece, was a case in point. The raga alapana was oceanic, the phrases coming sometimes like relentless waves lashing against hard rock, or like the tranquillity of the deep sea. There were blistering brigas interspersed with stirring karvais. Her approach to the kriti was the same, drowning herself, and the audience, into the beauty of Rama. Ganapathyraman’s tani built on Gayatri’s energy, lacing rhythmic threads into lovely little knots. It ended unexpectedly, however, without the usual mora and main korvai–even Gayatri and Usha were taken by surprise. Usha’s violin was still by her side!
This concert was amongst the best in this Oli series. It had feel, it had scholarship. It was pensive here and there, it was joyous elsewhere. It had calm, in oodles, and when required, it had fireworks as well. It had the musicians looking within themselves, and it still had them performing for the audience. It was classical, very classical, yet it was a tribute to folk. 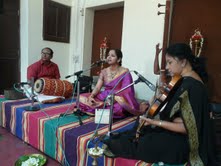 Email ThisBlogThis!Share to TwitterShare to FacebookShare to Pinterest
Labels: Vivadi