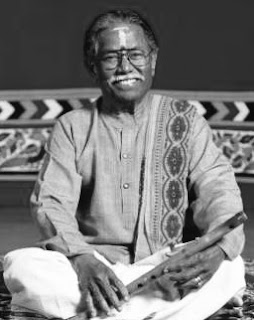 The New York Times called him “one of the most influential south Indian musicians in the United States.” He was the third Sangita Kalanidhi in his family of extraordinary musicians and dancers, with his sister Balasaraswati the only dancer so far to have received what has come to be accepted as the highest accolade in Carnatic music.
Tanjavur Viswanathan lived and taught in the United States for over three decades. In the process he moulded and shaped the best known American practitioner of Carnatic music in history—Jon Higgins, one among several compatriots of his to be deeply influenced by the beauty and power of the Dhanammal school of music that Viswa shared with them.
Viswa, Bala, and cousins Brinda-Muktha belonged to the ninth generation of artistes whose ancestors were dancers in the court of Tanjavur. Their grandmother Veena Dhanammal was the grande dame of Carnatic music, who in the 1930s, drew like a magnet the greatest artistes of her time to her soirees at her humble home in North Madras. Mother Jayammal was a fine musician too.
Learning to play the flute from Tiruppamburam N Swaminatha Pillai, Viswa managed to integrate the best of the Jayammal bani with his own creative genius, to create a unique Viswa bani as it were. In his concerts he interspersed flute-playing with singing, stopping occasionally to share his thoughts and insights with the audience. He was never a mass entertainer and therefore most of his concerts in India and abroad were intimate gatherings, with palpable audience participation. In fact, watching audience reactions during his concerts could be a fascinating experience, if only his music-making had not been a captivating one.
His imagination was described as both classical and romantic by one critic, who also said, “His command of ragas meant that he could prove just how deep-rooted tradition freed the mind to be original, innovative and unique. His expression seemed effortless. He never settled for anything but the ripest, and the best.” And most interestingly, “His audience too belonged to a vanishing breed of listeners.” Another saw in his music the tendency to surprise the listener with unexpected twists and turns like the wild rush of a forest stream, though normally resembling his cousin Brinda’s singing, “a placid river with crystal clear water flowing gently and peacefully, pushed only by the caressing fragrant breeze.”
A Fulbright fellowship took Viswa to University of California, Los Angeles, in 1958 to study ethnomusicology, but he returned to India to head the department of music at Madras University from 1961 to 1965. He went back to the US, and took his PhD at the Wesleyan University, Connecticut. Teaching there, he transformed the small university into a great centre of music learning, teaching an old tradition from Tanjavur to an eclectic collection of students. The annual Navaratri festival of music Viswa initiated at Wesleyan has become a permanent and delightful fixture in the calendar of the university.
In time, Viswa acquired cult status as a teacher and an innovator who devised a new notation system to represent the exquisite gamakas characteristic of his music. His most famous pupil was the vocalist Jon Higgins who achieved fame as Higgins Bhagavatar, the only westerner to be acknowledged as one by the traditionalists of Carnatic music. With another student, Matthew Allen, Viswa co-authored a successful book on the music of south.
Spreading an understanding of Carnatic music, with no compromise in terms of content, but through a modern, accessible vocabulary, he created a new paradigm of teaching and dissemination completely rooted in tradition, yet contemporary and fresh in outlook.
Posted by Sruti Magazine at Wednesday, July 11, 2012